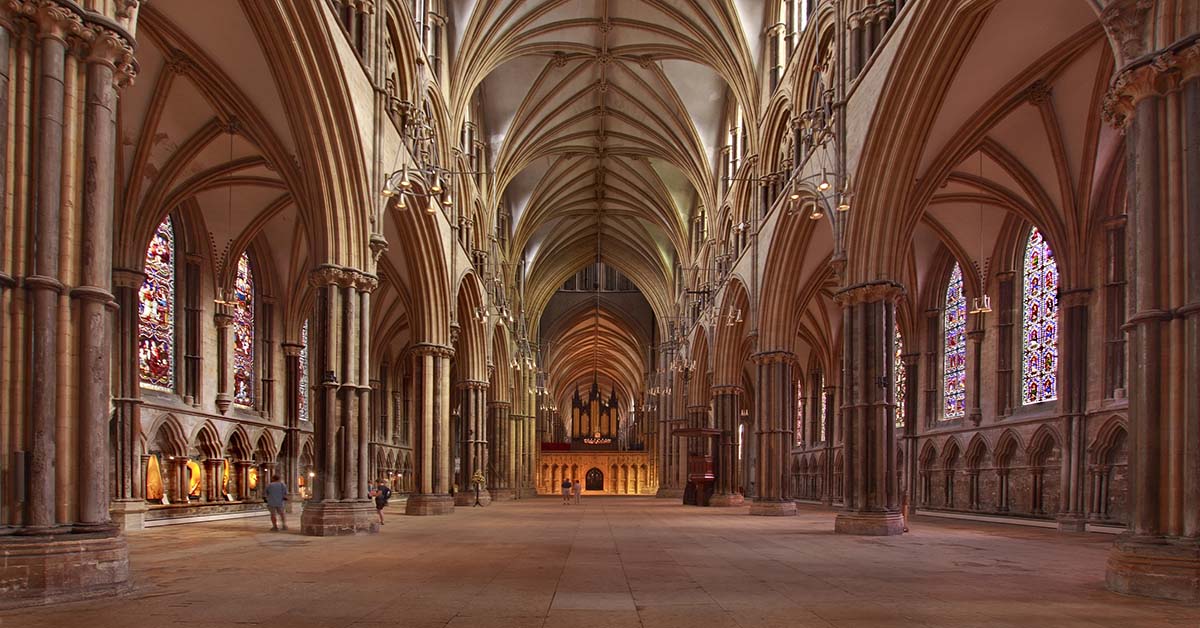 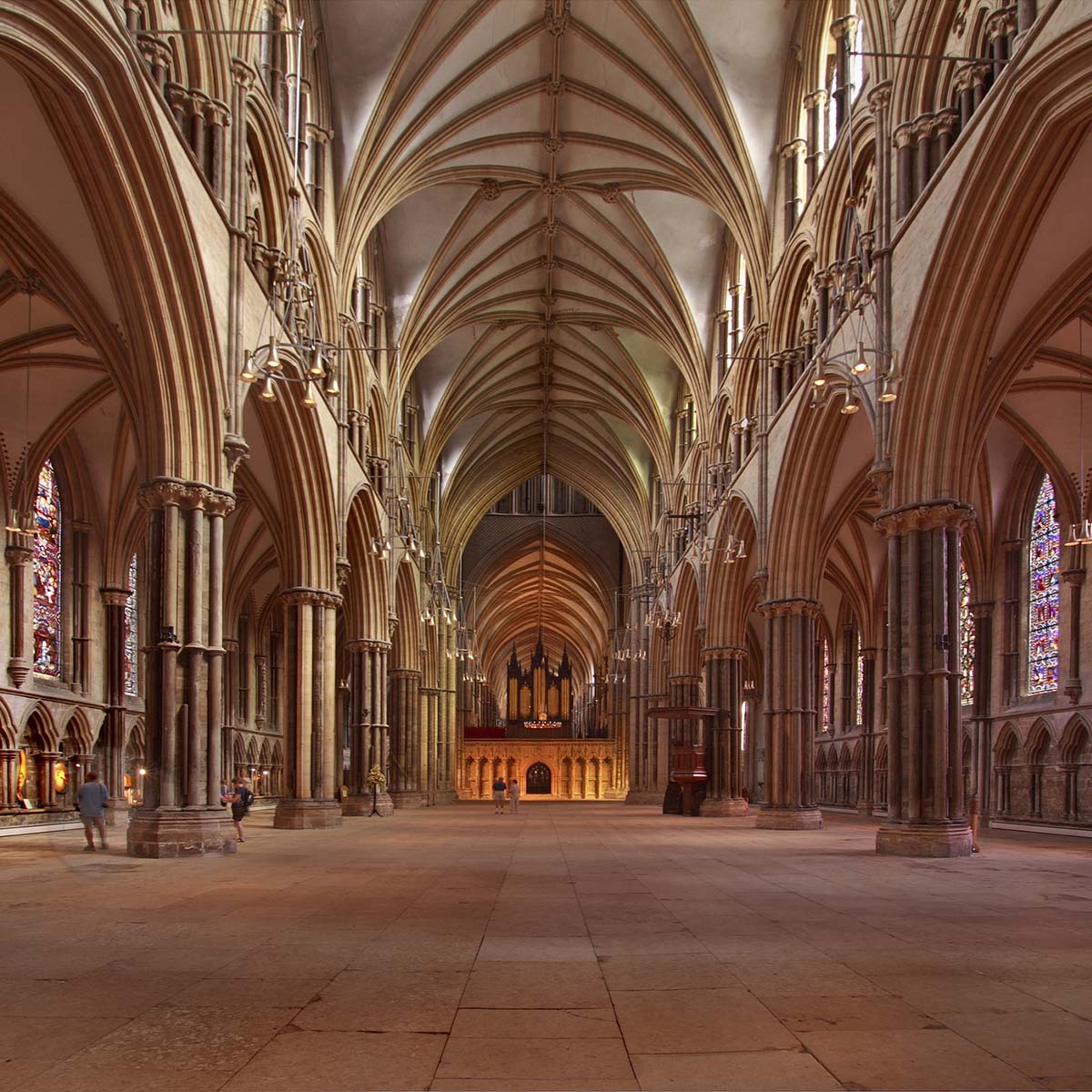 A Lincoln Surprise – Bloomsbury at the Cathedral

I’m a local now, and when out walking my dog across the flatlands a dozen miles south of Lincoln, the cathedral’s an abiding skyline presence – just as it would have been for those working this land nine hundred years ago.   For Lincoln is probably England’s most spectacularly set cathedral, and a big rival to Laon in the Hauts-de-France.

Having approached it, though, from afar, and ascended Steep Hill – a street named with much English understatement – the modern-day pilgrim or tourist won’t only be delighted by the honey-coloured limestone Norman west front and early gothic Chapter House.  Because there’s something really unexpected here, too, a small piece of bohemian Bloomsbury, delivered in 1956 by van from Charleston – that group’s polyamorous farmhouse on the Sussex downs.

But if the presence of a late 15th chantry chapel now decorated entirely in mid-20th century murals by Bloomsbury Group giant Duncan Grant sounds surprising, then that this proved controversial will probably not.  So controversial, in fact, that the colourful chapel was closed for twenty years and omitted entirely from the cathedral’s guidebook.

However, the murals’ seemingly mainstream subject of Christ as the Good Shepherd had been chosen by the Cathedral’s dean.  And their commissioning resulted from the largesse of a trust in memory of American-born artist Edwin Austin Abbey RA – the painter, in fact, of Edward VII’s coronation.  All the trouble was down to a combination of Grant’s interpretation of the brief, his modus operandi, and quite a lot of the Bloomsbury Group’s modus vivandi, too.

Although it’s the chantry chapel of Bishop John Russell (Chancellor of England during the reign of Richard III), it’s dedicated to St Blaise, patron saint of woolworkers – of great local significance as Lincoln was a major wool staple for the collection and taxation of wool for export.  And that’s of course why Grant chose to paint Lincoln’s inland port as his mural’s setting for the west wall – although in a somewhat Italianate style.

He peoples this scene with a series of barely clad stevedores in unambiguously homoerotic poses, labouring to load wool bales onto a ship.  While, to the left, a group of dowdily clad women are dramatically upstaged by this kinetic scene of semi-nakedness.  Only the little boy accompanying the group brings them some colour, while brandishing his Cross of St George flag at a distinctly phallic angle.

Bums, crotches and innuendo aside, the post-Reformation Church of England had had – certainly into the early 20th century – difficulty accepting murals in its churches and cathedrals, but this reluctance was seemingly now past.  What it still, however, did have difficulty with was living people modelling for the holy figures depicted – and Grant’s models for Lincoln came straight from the nearest and dearest section of his address book.

The three women, for instance, are Vanessa Bell – with whom Grant lived at Charleston (though she remained married to Clive Bell) – Angelica Garnett – the child he had surprised people by fathering with Vanessa, and Vanessa’s daughter-in-law, Anne Olivier Bell.

While the men on the west wall include the painter Edward le Bas as the bookkeeper, and their Jamaican friend Patrick Nelson is probably the stevedore on the far right.  Then, from over the door, the chapel is overseen from within a roundel by St Blaise himself, only in the form of Peter Morris – another artist, and whose captivating eyes Grant described as being of “blue-green winter-grass”.

But most significant of all is the Adonis-like Christ the Good Shepherd, flanked by sheep and shepherds, and pervading a warming golden-yellow across the east wall over the altar.  The model for this startlingly original portrayal of Christ was Grant’s long-term lover, the writer and classical scholar Paul Roche.

To say the controversy was all on the theological grounds that modern-day mortals shouldn’t pose for sacred murals is to suggest many people – even most – in the 1950s were innocently unaware of the work’s blatant campness.  Those older than I can comment, but I think it might perhaps have been so.

And while quite a few may have already disapproved of some Bloomsbury Group members for having been conscientious objectors, the fuller study of their lives and works was yet to come.  Consequently, the majority of viewers in those more censorious times would have known little of Bloomsbury’s mores and its members’ proclivities.

They would only have learned of these when, in 1967, the Sunday Times published juicy extracts of Michael Holdroyd’s biography of Grant’s cousin, Lytton Strachey, which contained many references to Grant’s life and loves; and twenty years later still with the publication of Douglas Blair Turnbaugh’s book on Duncan Grant himself.

But I feel all this can only add to what a joyous and life-affirming work his murals at the cathedral really are; and now they’re happily viewable again, we hope you’ll be able to come to see them with us on our 2022 Yorkshire and Lake District tour – with, of course, this stop a little further south in ancient Lincoln.