Ernest Gimson who died on 11 August 1919 was described by Sir Nikolaus Pevsner as ‘the greatest of the English artist-craftsmen’. He made significant contributions as an architect, a maker of plasterwork and turned chairs, and a designer of embroideries and metalwork but is probably best known today for his furniture. So how do you mark the centenary of one of Britain’s greatest Arts and Crafts designers? The Gimson Celebration organized by Annette Carruthers with Hugo Burge and held at Marchmont House in the Scottish Borders in May was a perfect example of how to go about this. The first of several country-wide events planned for the next twelve months, it focused on the art, craft, and business of furniture design – looking back of course at Gimson’s illustrious career but also looking forward to the work of contemporary makers inspired by his work and ideals. As he wrote: ‘I never felt myself apart from our own times by harking back to the past – to be complete we must live in all the tenses – past, future as well as the present.’ 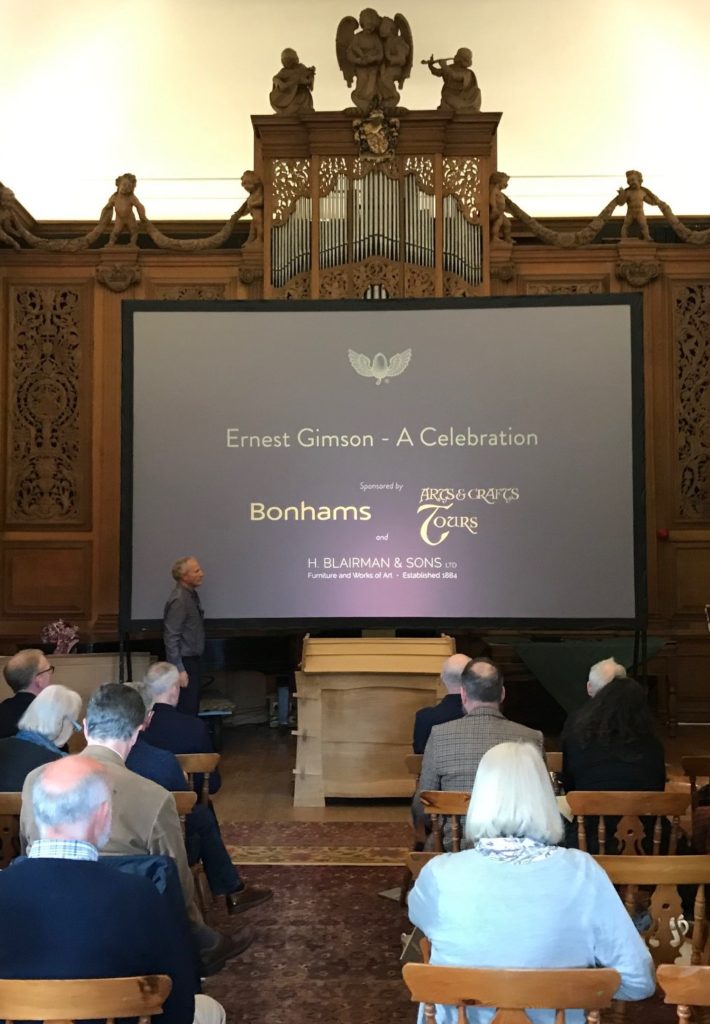 The event brought together academics, curators, dealers, designers, makers, students and many passionate enthusiasts from all over Britain, all of whom found much to stimulate, inspire and enjoy in the course of the day. Gimson and Arts & Crafts furniture were the focus of the morning, beginning with a life in three parts – from Leicester to the Cotswolds via London – by Barley Roscoe, Annette Carruthers and Mary Greensted, the authors of the forthcoming book Ernest Gimson, Arts & Crafts Designer and Architect to be published by Yale University Press in October. The context for his career as a furniture designer was set by Max Donnelly, curator of furniture at the Victoria and Albert Museum with an in-depth visual tour of work by Gimson and his contemporaries in the museum’s collections. The historical part of the day concluded with three talks: the first looked at the significant support and patronage of Gimson’s family including two of his most interesting domestic projects, Inglewood in Leicester and Stoneywell in the Charnwood Forest outside the city. The nuts and bolts of his furniture making practice – Gimson’s relationships with his workforce and clients, and the importance of ecclesiastical commissions such as those for Roker Church in Sunderland – were described by Annette while I focused on the contributions of his friends and colleagues Ernest and Sidney Barnsley. The impact of Sidney’s designs for the Church of the Wisdom of God in Lower Kingswood, Surrey were significant while he also played a major role as Gimson’s executor in supervising the building of the stunning Memorial Library at Bedales School.

The afternoon was devoted to contemporary woodworkers including the local firm Charles Taylor Woodwork responsible for numerous functional but carefully designed and beautifully made pieces for Marchmont including trestle tables based on one of Gimson’s designs. Adrian McCurdy who makes cleft oak furniture and decorative carved panels nearby in Jedburgh is very much part of the living Arts & Crafts tradition through his father Alec, a fine furniture maker who trained with Edward Barnsley at Froxfield near Petersfield. Another contemporary maker Nicholas Hobbs introduced us to his work culminating in his impressive pieces he designed and made for St Hugh’s Chapel, Lincoln Cathedral in 2017 – furniture that is full of meaning yet intensely practical. One of the highlights for many of us was the intensely personal and moving short film The Chair Maker: Lawrence Neal produced by Hugo Burge. The last in line from Gimson’s chair-making enterprise, Lawrence is now being supported to train two apprentices who will carry on the craft in new workshops at Marchmont. Some of Lawrence’s chairs and those of his father are in the regular use at Bedales and a new addendum to the film was a series of interviews with ex-students who treasure their formative experiences studying in the school’s library including the furniture maker David Linley, the Earl of Snowdon.

And then, of course, there was the venue to luxuriate in. Marchmont House is an impressive Palladian mansion with a wing designed by Sir Robert Lorimer, the Scottish Arts and Crafts architect and a contemporary of Gimson who admired his work. The house is in a beautiful rural location near the town of Duns with extensive grounds seen possibly at their best in the spring sunshine we were blessed with. We were able to appreciate new projects including a fresco painter at work at a mural using the newly-unearthed Marchmont red. From our extremely comfortable bedrooms to the dining area we were surrounded by contemporary art and 19th-century to Arts & Crafts furniture from Pugin through to Gordon Russell. The official part to the day ended with an informal but hands-on look at some of these pieces.

Gimson’s main concern was the provision of useful and rewarding work for his craftsmen and from the lively discussions, we saw how handwork can still provide a worthwhile and rewarding occupation. Nicholas Hobbs’ thoughts have offered me a fitting conclusion:

‘Approximately one hundred years since the death of Ernest Gimson and just fifty years later on the 20th July 1969, man steps onto the Moon.A sample of the moon rock collected on that mission made its way to labs at Sheffield University and into the hands of a Ph.D. student who had developed a new technique and was able to date the Moon rock faster than the team of NASA scientists.As a result, he is now a renowned academic and has been, and continues to be, awarded many accolades for this single piece of work. One was in the form of a monetary prize with which he commissioned a dining table from me. Each generation creates wealth by the advancement of technology and a part of this wealth via enlightened individuals is then used to support the crafts of the age. Ernest Gimson received support from members of the family in the engineering business, I have received support as a result of the first Moon landing, the apprentices of Lawrence Neal are supported by Hugo Burge with the proceeds derived from digital technology. And so we have a further rendition of the oft-quoted Gimson, past, present, future’.