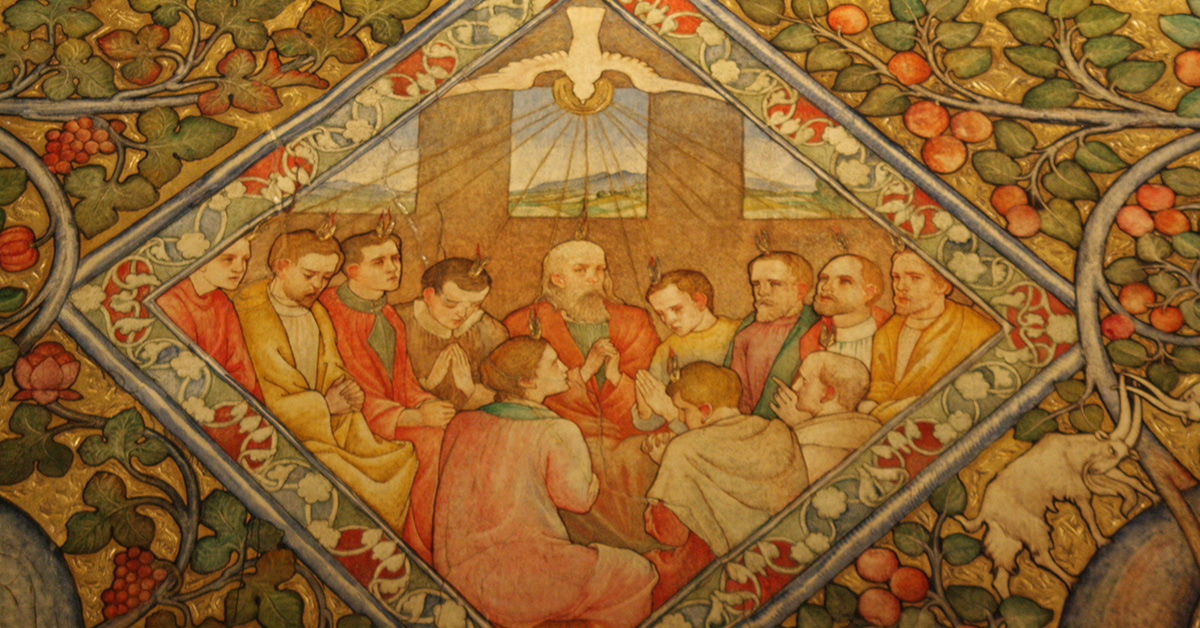 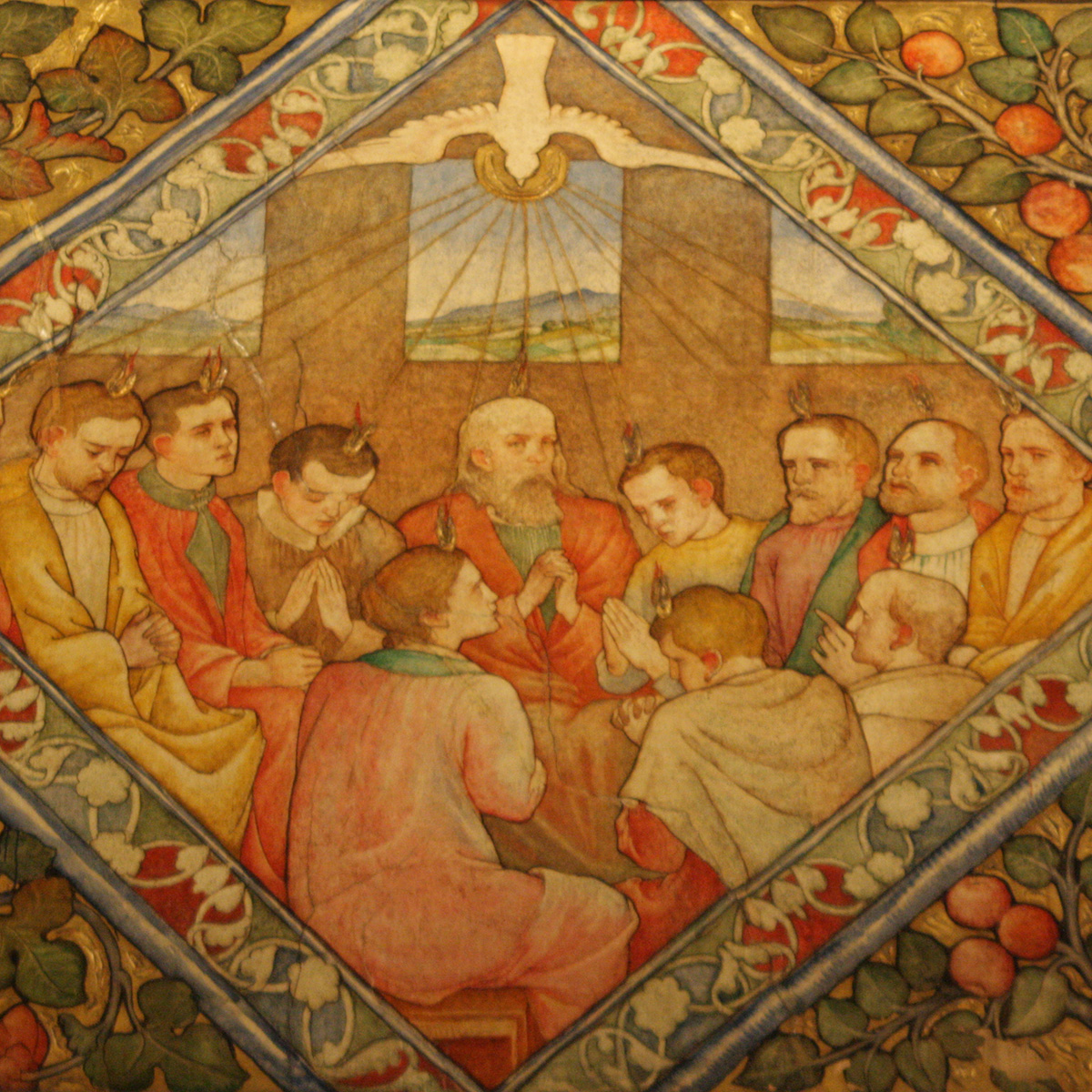 Art and Soul in The Borders: A Look Ahead

The majority of artists and craftspeople involved with the Arts and Crafts movement were motivated by a desire to improve the lives of those around them. When thinking of a career, William Morris at one time contemplated going into the church, but then decided he could achieve more by helping improve the physical world within which the people around him were constrained to live. One of the people we will ‘meet’ on this tour went the other way. Mgr. John Hawes started life as an architect but then felt called to the church. Another, Sarah Losh, was concerned for both the artistic and spiritual life of the community where she lived.

It is probably fair to say that most of these artists and craftspeople had little time for ‘organised’ religion, while, however, being deeply concerned with aspects of life beyond the merely physical.

At Queen’s Cross church in Glasgow we can see how Macintosh takes the latest ideas circulating within the presbyterian church at the time and provides a building that is striking and yet devotional. It accommodates a large congregation yet provides the necessary space and arrangement to allow regular communion services, a fairly recent innovation in the Presbyterian church. The decoration is not specifically Christian, but looks to the natural world, with stylised flowers and plants.

St Margaret’s church at Knightswood, a Glasgow suburb, is by contrast a more typical ‘Scottish’ building. Designed by Sir Robert Lorimer but completed after his death under the direction of John F Matthew. Lorimer was a pupil of Robert Rowand Anderson and is one of the leading Scottish ‘Arts and Crafts’ architects. The church is plain and rugged. The prominent tower makes a nod towards Scandinavia. Internally the lectern and a window dedicated to St Margaret are fine ‘Arts and Crafts’ pieces.

Just outside Glasgow is another early twentieth century church, originally known as St George’s, in Paisley. It is now Re:Hope church and used by a new denomination, As so often happens, particularly in Scotland it seems, the old church organisations are unwilling to adapt to the needs of a younger generation and a new expression of church takes over. The architect here was William Daniel McLennan, a Paisley man, with a very original style as Arts and Crafts moved towards Art Nouveau.

After exploring Glasgow we go ‘Doon the watter’, the traditional Glasgow outing to the Isle of Bute. Here the third Marquess of Bute built his house ‘Mount Stuart’ on the proceeds of mining steam coal in the Welsh Valleys, coal that powered the British Empire. The present house was designed by Robert Rowand Anderson from Edinburgh in a flamboyant European gothic style. Anderson’s architectural practice trained several architects who went on to become key figures in the Scottish Arts and Crafts movement. Anderson would not have considered himself an Arts and Crafts man, but he gave a keynote speech at the 1889 meeting in Edinburgh of ‘The National Association for the Advancement of Arts and its application to Industry’. This was one of the defining moments of the Arts and Crafts movement in Scotland. Mount Stuart itself contains a number of fine works by well-known Scottish Arts and Crafts designers.

Edinburgh is a very different city from Glasgow, more refined, less robust. There are a couple of venues decorated by the astonishing Phoebe Anna Traquair. The song school at the cathedral, which seems like a manageable project, and then the entire interior of the erstwhile Catholic Apostolic Church, now maintained as a celebration of Phoebe’s talent and labour.

At St Giles Cathedral, an honorary title because the Presbyterian church doesn’t have bishops, or ‘cathedra’ for them to sit in, we find the Arts and Crafts extravaganza of the Thistle Chapel. This was built to be the ceremonial centre for the Order of the Thistle, the Scottish equivalent of the English Order of the Garter. This is the group of nobility most closely associated with the monarch. In 1905 Edward VII appointed a committee of members of the Order to investigate the possibility of building the chapel at St Giles. The proposal was approved, and Robert Lorimer was appointed architect. He was knighted for his work on the chapel. Whilst he did design buildings and furniture of a style unconstrained by historical precedents, here he went for a late gothic structure decorated by contemporary craftspeople of the highest calibre in the Arts and Crafts tradition. Craftspeople represented include the Clow brothers, woodcarvers, Phoebe Anna Traquair, enamel plaques, Louis Davis and Douglas Strachan, ‘stained’ glass, and Thomas Hadden, wrought Iron.

In the suburbs of Edinburgh, at Colinton, there is a small Church of Scotland (Presbyterian) dedicated to St Cuthbert, designed by Sydney Mitchell. He was an important figure in the Arts and Crafts movement in Scotland, and here designed a church with its exterior in a traditional Scottish style though retaining an earlier Italianate tower. The interior can best be described as ‘Byzantine’ but includes many original features such as the chancel screen with its bold lettering. The presbyterian church at this time was moving away from its traditional rather severe emphasis on preaching alone and accepting a less cerebral approach where art and emotions could play a part in building the relationship between mankind and God. However, this was early days in the changes within the presbyterian church, and the communion table seems rather apologetically set within a too small apse, in relation to the size of the church. Phoebe Anna Traquair’s grave is in the churchyard.

East of Edinburgh is Port Seton. Here Sydney Mitchell was given a free hand to design a new church, (shown in the illustration), for the Free Presbyterians. He came up with a delightfully decorated and original building but incorporating enough ‘gothic’ details to satisfy those who felt Christianity could only be expressed in gothic forms.

Heading south towards England we come to Marchmont House, an eighteenth-century mansion enlarged and updated by Sir Robert Lorimer with panelling and carving by the Clow brothers. The estate is now a major supporter of creative activities within Scotland.

Just over the border into England is the Ford and Etal estate. Lady Waterford its nineteenth century owner was a talented artist. Having provided a school for the local community she proceeded to decorate it with murals heavily influenced by the pre-Raphaelites. Now known as the Lady Waterford Hall it welcomes visitors to experience late Victorian life as illustrated on the walls.

Newcastle is a fine city that, although best known for the heavy industry that dominated its economy a century ago, has fine Georgian streets and medieval buildings. The Arts and Crafts movement is best represented by the church of St George in Jesmond, a couple of miles north of the city centre. Here, Charles Mitchell, who made his fortune as a ship owner, paid for the church complete with decoration, which was consecrated in 1888. The decoration consists of stained glass windows, mosaics, paintings and sculpture. Much of the work was carried out by T.R. Spence who joined the Art Workers guild in 1886.

The next shipbuilding centre to the south was along the River Wear. Here Sir John Priestman, a successful ship builder, largely paid for the church of St Andrew as a memorial to his mother. The architect was E.S. Prior, and the style is innovative Arts and Crafts. Again, decoration and furnishings are by the best craftspeople of their day (1906-7), including Ernest Gimson and the William Morris tapestry workshop.

Heading inland is the remote hamlet of Gunnerton, about seven miles north of Hexham. Here a new church was built to serve local population in 1899. The architect was John Hawes, who came to the notice of the vicar of Chollerton, the large parish which included Gunnerton. John Hawes had exhibited a model of a church intended for such a location to the Royal Academy Summer Exhibition and was effectively head hunted by the Revd. Hornby to carry out the work. As a true Arts and Crafts building it is designed for the interior, the exterior has no pretensions whatsoever. While working here John Hawes felt called to become a priest, and then had a long and fruitful career as both priest and church designer / builder in both the Caribbean and Western Australia.

Travelling west, just before Carlisle, is the small town of Brampton. Here the church of St Martin was built and decorated by the same group who built ‘Red House’ for William Morris. The architect was Philip Webb and windows were provided from the William Morris workshop, designed by Edward Burne-Jones. The church was largely financed by the Hon. Charles Howard of nearby Naworth Castle. He and his wife Rosalind were both artists and considerable patrons of the Arts and Crafts Movement.

Just south of Carlisle is the village of Wreay, (pronounced Reah) St Mary’s church is the unique creation of Sarah Losh. A talented and single-minded lady who wanted to give the village a church in line with her own ideas. She encouraged local people to get involved in the work of building and decoration and carried out much of the decorative work herself. This was well before John Ruskin and William Morris promoted the ideas that industrial mass production was the enemy of a healthy society and the solution was a return to hand craftsmanship. Like the Arts and Crafts workers who followed her, Sarah’s decorative themes are the spiritual and natural worlds, represented by angels alongside plants and animals.

North of Carlisle, on the way back to Glasgow, is the site of a huge munitions factory established during the first World War. Two completely new villages were built to accommodate the workforce, and these were the responsibility of the team that had been assembled to design Letchworth Garden City under the direction of Barry Parker and Raymond Unwin. The ‘Garden City’ was a commercial enterprise that nevertheless aimed to realise some of the objectives of the Arts and Crafts movement, providing a healthy living environment freed from the tyranny of industrial mass production. The villages of Gretna and Eastriggs house churches designed by Raymond Unwin and Geoffrey Lucas with a distinctive Arts and Crafts feel, but of necessity relatively plain and undecorated.

The return to Glasgow is through the beautiful, largely rural, lowlands of Scotland.

Roger Button studied at King’s College Cambridge and the University of Liverpool. Even though his career is as a civil engineer, he is also the chaplain at the Clark County Family YMCA and he is an ordained, recorded Quaker minister. With a Master of Divinity degree and a certificate in spiritual formation, Roger Button is also a certified spiritual director. He has been a youth pastor, an associate pastor and a senior pastor.