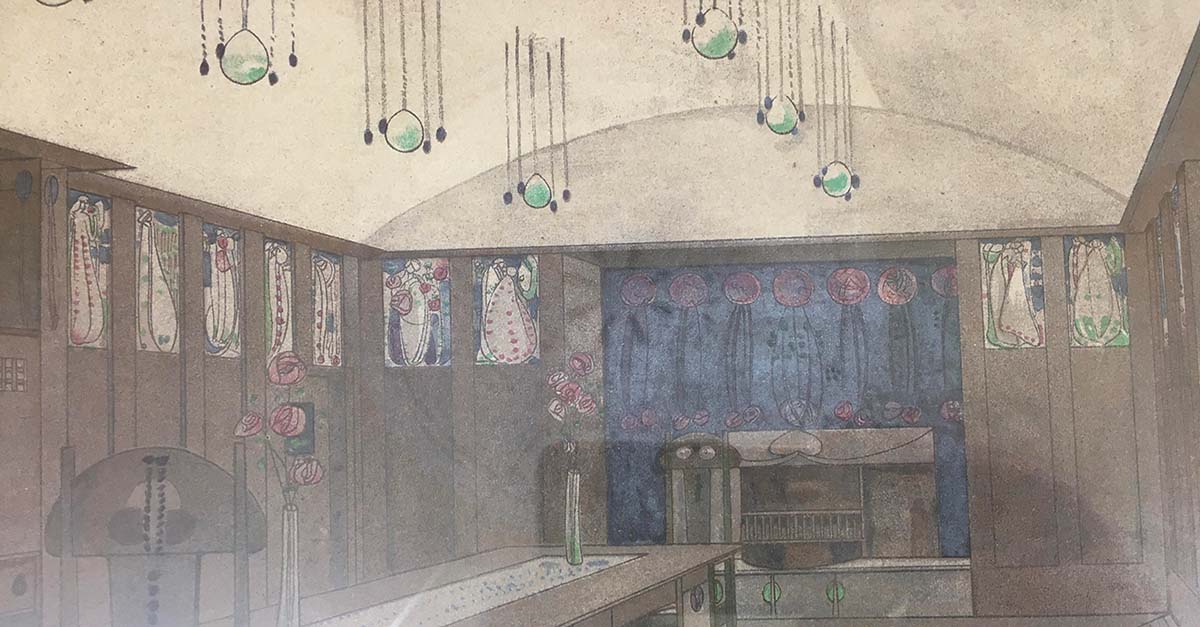 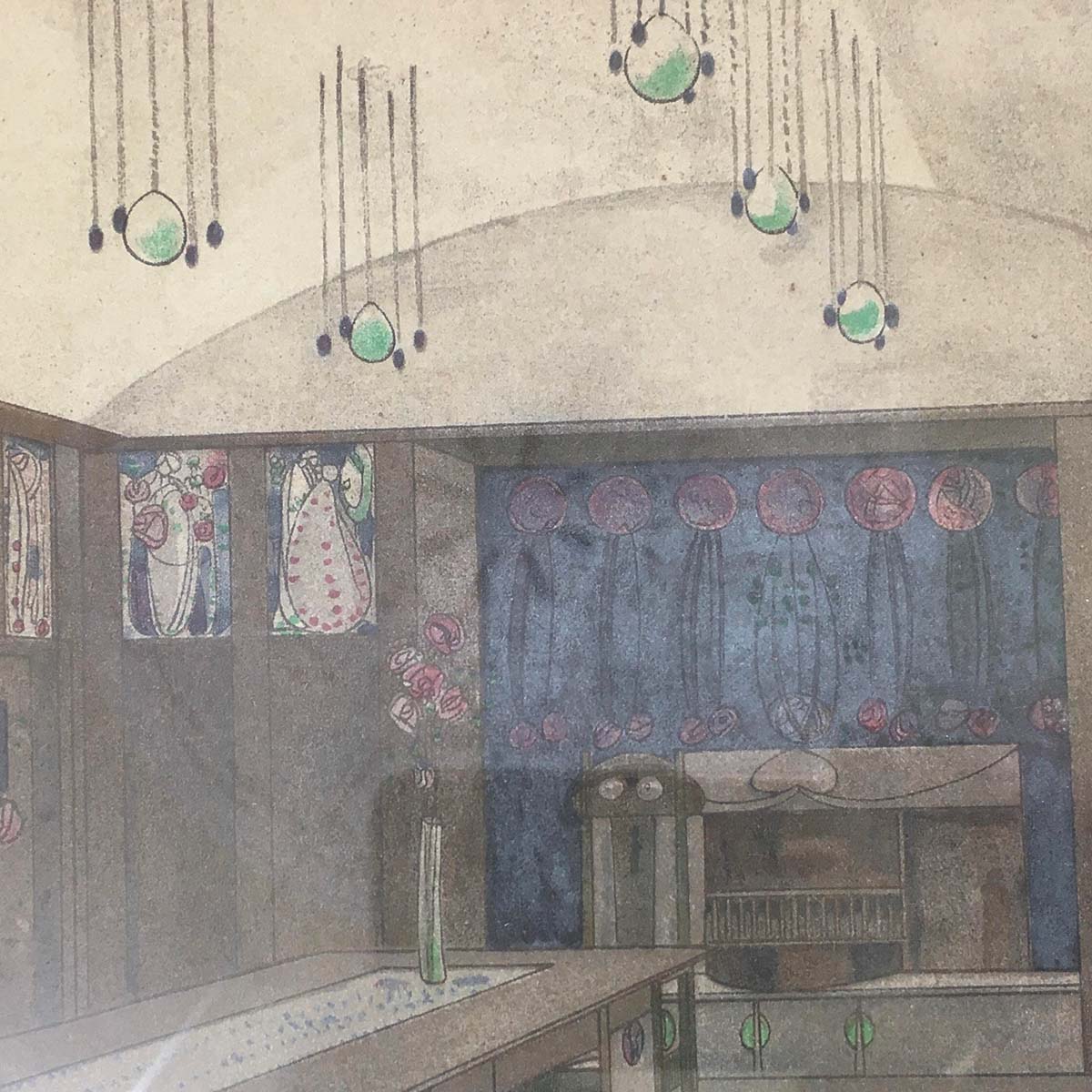 We were advised to first study the two gesso panels The May Queen by Margaret Macdonald and The Wassail by Charles Rennie Mackintosh, which were the first they ever completed, and were made for Miss Cranston’s Ingram Street Tea Rooms in 1900.

An arrangement was made by Graham that we should go to Kelvingrove Museum and Art Gallery as these two panels, were at that moment being restored, and so we could study them closely. Once there we were led down to the basement and in a tiny room, we found two young ladies working away. One was Spanish and the other was local and they seemed to be quite high, as the solvent they were working with was very pungent indeed, and there was only the smallest fan for ventilation. It wasn’t long before we were all very happy!

What we discovered was that these two large and wonderful panels, each one in three sections, had been painted over with green emulsion paint, leaving only the faces and hands in their original state. The two ladies, with small cotton buds were carefully removing this emulsion paint, an incredibly slow and painstaking job.

They were working on a section at a time and meanwhile the other precious panels were just left in the corridor outside, leaning against a wall.

It was however incredibly interesting for us as we could see and touch the actual surface and investigate how they had been made. The base material was rough canvas over which gesso had been brushed on. The raised lines were made with string, which had been dipped in gesso before being applied. Finally, the panels were painted.

We left there reckoning that we’d soon be using a lot of string. However fortunately, a little later, in 1990, we saw a cabinet by Mackintosh exhibited in an exhibition entitled Glasgow’s Glasgow, which was held in the cavernous space underneath Central Station. Inside this cabinet were two small gesso panels by Macdonald, and these were a huge enlightenment as the lines were made with gesso. How this was done we didn’t know, but at least they weren’t made with string!

At the same time as these investigations, we set about researching what exactly gesso was, and found that there was nothing written on the subject at all by Margaret Macdonald. She was, we discovered, extremely secretive about her method of working.
We eventually found information in a Renaissance volume on painting techniques by Benevenuto Cellini (1500-1571) and then finally, to our great delight a 1985 reprint of a book entitled Gesso by artist Idalia B Littlejohns (1874-1955) ………. and set about trying to make it ourselves. We then spent many months experimenting with making and painting gesso.

We enlarged the print we had of the Mackintosh’s interior perspective of the Dining Room at the House for an Art Lover, which had been submitted for the competition. The reason for this was that although nine of the twenty-four or more likely thirty panels were shown, they were so tiny we could hardly make out what was going on.

Once they were made bigger, we could just see that the five panels shown on the left-hand wall and the four on the end wall showed figures of a very romantic nature, dressed in flowing robes, and much influenced by Pre Raphaelite art. It was obvious that these panels would have been made by Macdonald. Further panels on the right-hand wall, were only indicated.

We spent some time studying these figures. Eventually, we felt that they were in some kind of enclosed rose garden, as there were a great many roses in these small design sketches. In all it appeared to be like an illustration of La Roman de Rose, a medieval poem of a dream vision of courtly love.

Our research also included finding out as much as possible about the life-style, likes and dislikes of Mackintosh and Macdonald. Right away it was obvious that they both loved the books by the Belgian Symbolist poet, playwright and essayist Maurice Maeterlinck, who won the Nobel prize for Literature in 1911. This was revealed because one of their friends from Vienna came to Glasgow and noted that “ their home is strewn with the volumes of Maeterlinck”. In fact he clearly became something of a guru to them in their search for a spiritual dimension to life.

The title of three of his books give an idea of the kind of thing the Mackintosh’s were interested in at that time……….The Treasure of the Humble, The Great Secret, and Wisdom and Destiny.

We also discovered that Fra Newberry, the inspirational Director of Glasgow School of Art, who had first introduced them to each other while they were students, brought to their attention an edition of Le Reve (The Dream) by Emile Zola with strange illustrations by Carlos Schwabe (1866-1926 ) who was a leading light of the Symbolist movement and had created a poster for the influential Salon of the Rose and Cross exhibition which showed examples of Rosicrucian art. In fact, a number of the teachers at the art school were indeed Rosicrucians and heavily into spiritual and symbolist art, which was very prevalent at that time. The Mackintoshes were also undoubtedly absorbing the work of the Irish poet, playwright and mystic WB Yeats, who published in 1897 his book The Secret Rose, and who was a member of an esoteric society called The Golden Dawn.

We soon realised that the rose that features so much in their work was much more than a decorative motif but carried a deeper meaning and significance.

At around this point Graham asked us to come and see him and give him an update of what we had discovered so far.

However, after we mentioned their interest in spiritual matters and the possibility that they had absorbed Rosicrucian beliefs, we received a very sharp letter saying that we should halt the research and get on with making the four panels based on what we could actually see in the small illustrations of the panels in the Dining Room perspective.

So, this is what we did, copying as closely as we could what we could see. Fortunately, just at this point, we discovered in a book Remembering Charles Rennie Mackintosh by Alistair Moffat, a section which enlightened us as to how Macdonald made her lines of gesso. On page 49 there’s a section where Agnes Blackie, who was brought up in The Hill House, speaks about how she watched as Macdonald ………..” used a piping bag like you would if you were icing a cake, and then stuck things into the plaster. It was very beautiful “

This passage had an immediate effect on us, and Jenny started experimenting with an icing bag we bought in a cake shop that sold everything to do with baking and decorating cakes.

It soon became obvious that it was very difficult to make a continuous and even line using gesso, which we discovered had to be of a very specific and even consistency. Not only that but working with the icing bag was extremely tricky and needed two hands.

Eventually, we discovered about the icing gun. This was much easier to use but still the consistency of the gesso mixture had to be perfect. Progress was definitely being made, but slowly.

In this same book we also discovered that Macdonald” thinned out the paints for tinting the gesso with turps” as she worked in oils. To be able to do this she sealed the gesso surface with a shellac varnish before painting it. This was quite a revelation as everything we had discovered about gesso was totally contrary to this. In the Renaissance and indeed before that in ancient Egypt, artists had always used egg tempera water-based paints, as this is the traditional medium for working directly onto the gesso surface.

We had pretty much always worked with water-based paints, and so we decided to see if we could achieve with these paints the effect that Macdonald achieved with oils. We therefore decided to work in egg tempera.

Time passed and we progressed with the four panels, for which we were provided with truly excellent custom-made boards constructed with laminated sheets of wood to stop any possibility of warping.

Then, one day, we received a surprise visit, from a great authority on Mackintosh, Roger Billcliffe who not only runs his own gallery but is the author of the famous and definitively informative book Charles Rennie Mackintosh, Furniture and Interiors. He had heard what we were up to and had come to have a look.

What happened next was shocking…

About Dai and Jenny Vaughan

Dai (David) and Jenny Vaughan are British contemporary artists whose work spans decades and are well-known primarily for their work in Glasgow. They created a series of anamorphic mural portraits of famous people born in Glasgow at the Princes Square Shopping Center. They were chosen to design the Christmas lights for George Square and Cardiff City Council. Most notably, they worked on gesso panels for the House for an Art Lover and Willow Tea Rooms.