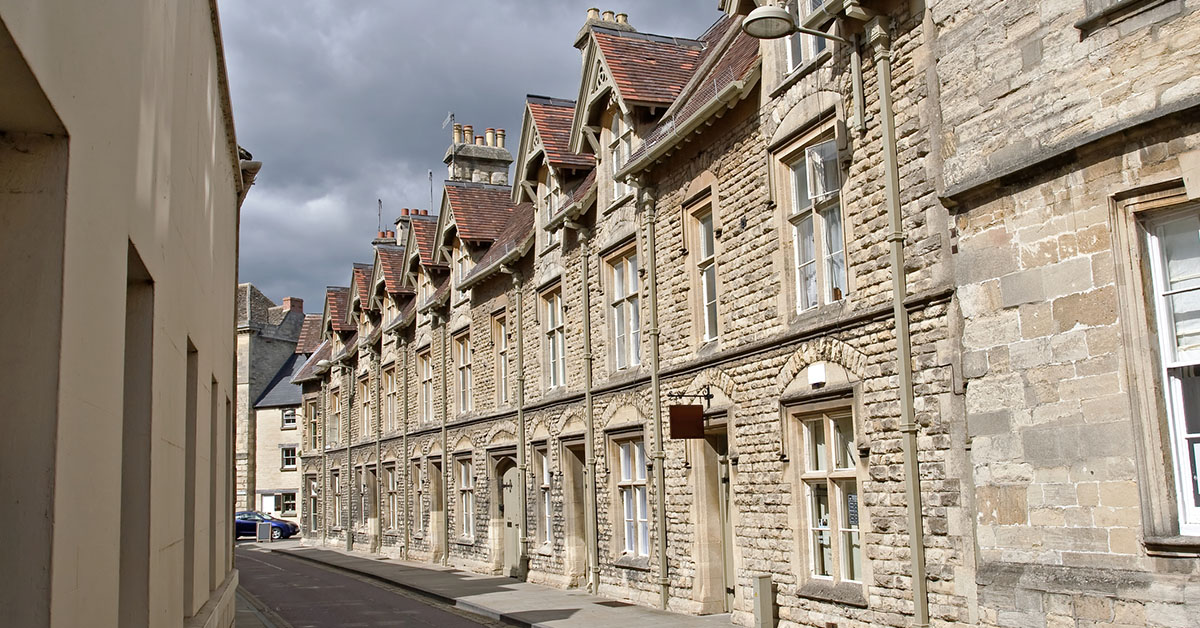 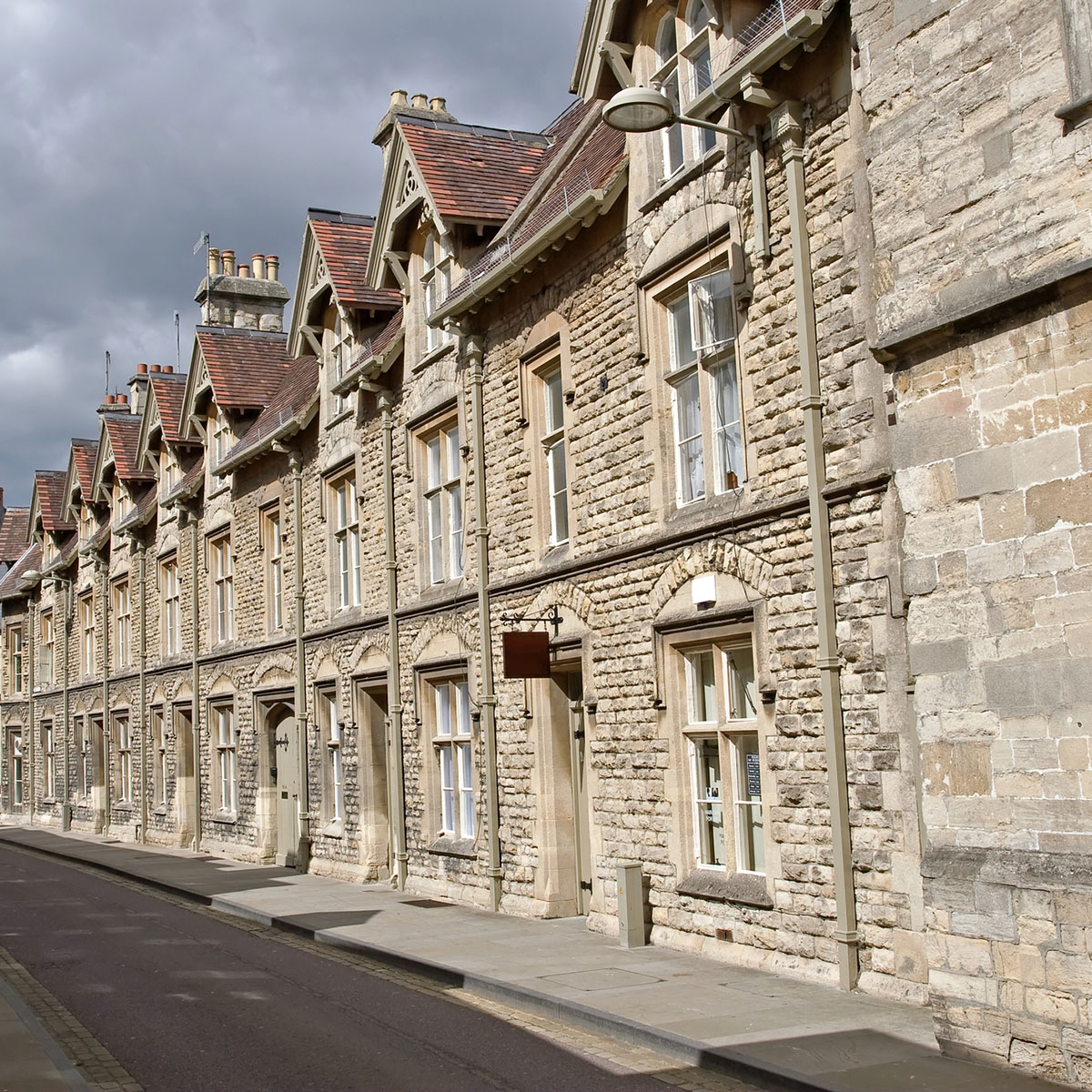 In 1893 the 28 year old Ernest Gimson went to the Cotswolds, specifically to the village of Sapperton where he went to Lord Bathurst looking for work. Bathurst offered him one of his Sapperton houses at a low rent if he would repair and restore the property.

Gimson completed the task with such sensitivity and respect for the landscape around it that he and his colleagues were soon undertaking other architectural projects. Their reputation for integrating new buildings harmoniously into the landscape quickly grew.  This appreciation and understanding of how a building relates to its surroundings lay in their training – of a kind that no architect receives any longer.  Then, every apprentice was fully expected to study the history of architecture as an essential foundation. Students were encouraged to study craft techniques and to draw old buildings and churches to claim a real knowledge of artisan skills. Crucially, apprentices were taught the virtue of simplicity.  Gimson and his circle of socialist architects, like Ruskin, Morris, William Lethaby, Philip Webb, Detmar Blow and the brothers Sidney and Ernest Barnsley, excelled at marrying simple, functional design with skilled craftsmanship. The result was that Nicholas Pevsner, the post-war critic and arbiter of architectural taste, described Ernest Gimson as ‘the greatest of the English architect designers’.

A further result was that Lord Bathurst had the foresight and generosity to establish a school of sympathetic architecture.  He grasped fully how necessary it was to consider the impact of new building on the environment.

Never have Gimson’s skills, and those of his circle, been so in need as we see our countryside increasingly defiled by eyesores. Time would be well-spent examining the designs for the first Garden Suburb in Letchworth by Arts and Crafts architect Charles Voysey and those for Hampstead Garden Suburb by the equally successful designer and consultant architect on the project, Sir Edwin Lutyens.

Today it is rather different. By and large the British are fed up with modern architecture and what they consider to be its Brutalist glass and steel monstrosities. Despite polls that prove this time and time again, architects simply ignore people’s views. Indeed, if the public has the temerity to criticise their latest works, there is uproar – as I discovered to my cost.  At a dinner about a year ago, I asked Norman Foster, globally renowned for designing the widely derided London’s City Hall and The Berlin Reichstadt, if he were pleased by the government’s new Building Better Building Beautiful Commission (BBBBC).  The commission was finalised by the Secretary of State for Housing, Communities and Local Government, Robert Jenrick, and chaired by Sir Roger Scruton.  The commission’s remit was to ‘tackle the challenge of poor-quality design and build homes and places across the country  … ensuring local, popular consent. How wrong I was to assume Foster would applaud the initiative.  Refusing to discuss it, he lost his temper, spewed ridicule on Scruton, and stomped away.

One look at Dezeen, the international modernist architects’ favourite website, reveals the mismatch between modern architects’ and the public’s concept of beauty.  Bristol University’s new library was highlighted on the site as “a shining example of civic architecture”, suggesting it was a grand, generous gift and of huge benefit to the community.   Yet it was condemned by local people as ‘an atrocity, a new unwanted landmark, way out of scale….absolutely horrific’. Despite such overt disgruntlement, in March the councillors voted it through 6-4.

First, a nine-storey glass and steel development, within a Grade 1 area in Old Brompton Road. Despite carefully argued criticisms and protests at public meetings, the community’s feedback was totally ignored by Kensington and Chelsea councillors and building planners. The sequence of events and corruption was distressingly but brilliantly exposed on a website called The Dame.

Then there is the £1.3 bn Olympia London development, which will sprawl over a historic site of over 14 acres. The landmark exhibition centre is held in great affection as home of the International Horse Show and Spirit of Christmas Fair, amongst many other annual events. Currently, it is being transformed into a gigantic eye-sore, comprising a multi-storey office block, hotel, concert hall, bars, restaurants, theatre and shopping mall, with poorly thought through infrastructure that will bring local traffic to a standstill.  Meetings were attended by scores of vocally angry and distressed residents, but the developers refused to listen to a single concern. ‘Lateral solutions have had to be found’, say the manager Pell Frischmann and structural and civil engineering director Mike Hitchens. ‘Yoo Capital has been constantly asking us, can we do this, can we do that? We’ve had lots of fun reimagining this space’.

The chasm is widening between what people want to enhance our cities, countryside and our lives and what architects are giving us, rejecting any attempts at consultation or collaborative planning. It’s not just the cities but the British countryside that should be on Red Alert:  a massive building programme is planned all over England and has already started – similar to the huge reconstruction effort after the Blitz and Second World War.

During Covid, there was a Government announcement and White Paper, backed up in the Queen’s Speech during the State Opening of Parliament on 12th May, pledging more house-building.  Ominously, these include developments in Areas of Outstanding Natural Beauty, with the Cotswolds as a particular target.  This is entirely in violation of the 1966 law which protects such designated areas. Sir Geoffrey Clifton Brown, MP for the Cotswolds spoke out on a video interview last summer saying that building in the Cotswolds had overstepped the mark with unnecessary over-development.  Yet he failed to boost his example with examples, like the beautiful – now endangered – 18th century Bathurst Park estate, inherited by the 9th Lord (Allen) Bathurst 2011. Under the authority of Allen Bathurst, the trustees responsible for administering the estate recently sold fields on the edge of Cirencester, allowing an architect to build 2,350 soulless new homes and increasing the already-overbuilt market town by a further 40%. In an angry demonstration following the Council’s meeting, Bathurst had the narrowest of escapes from a Citizen’s Arrest.

Quenington, the beautiful, little village in which I live near Cirencester, is proof of such desecration.  This year, a property developer, put forward a revised application for a vastly oversized, inappropriately positioned house, that will loom grandiosely over exquisite 17th century cottages. Were Gimson alive, he would scoff at such an ill-conceived plan, knowing instinctively that it would destroy the entire village’s character and visual harmony.  Indeed, planning permission had already been refused in 1993 and 1999 and when a third attempt was made this year, the Council received 34 letters of protest, including a strong, detailed letter representing the 40,000 members of CPRE, a body formed in 1926 to Protect Rural England from overdone urban sprawl and ribbon development.

The situation looks bleak. Lawyers employed by the villagers for a Judicial Review turned out to be too expensive to take on further, so the case now rests with an Ombudsman. But the Cotswold District Council Committee is proposing to change the constitution1 to strengthen the executive decision-making ability and to reduce the right of members to influence planning decisions.

Britain has wonderful clever, talented modern classical-trained, incorruptible architects and planners. Now is the time to insist that building planners employ them. After Sir Roger Scruton’s untimely death, Nicholas Boys Smith has written widely on planning, and the proven links between good design and wellbeing2.  If the pandemic has taught us anything it’s that collaboration makes for a happier, smoother running society.  It’s therefore disturbing and distressing to be emerging from lockdown into a world in which architects and developers ignore residents’ wishes and needs, treating them almost as lab rats in their experimental building schemes while they rake in the money.  Very quickly architects have become destroyers rather than builders of functioning, happy communities.  It’s high time Nicholas Boys Smith was listened to and local interests taken into account. There are plenty of architects with vision and ability to take on this task.

1)  The Council’s new planning process is designed for administrative ease and specifically to enable the planning officer to ignore the views of parish councils, local residents or other informed bodies such as the Council for the Preservation of Rural England (CPRE). Ostensibly, the role of the planning committee now is merely to consider strategic planning matters rather than to act as a body representative of the local area and its needs. There seems no real remedy against a misinformed or incompetent planning officer for his/her decision. I fear the Queen’s speech on 12th May will merely make matters significantly worse.

Jessica Douglas-Home is an artist and author. In 1986, she became founder and chairman of the Mihai Eminescu Trust, a foundation to preserve Europe’s unique cultural heritage in the Maramures, and in the medieval villages and land in Saxon Transylvania. She is the author of: