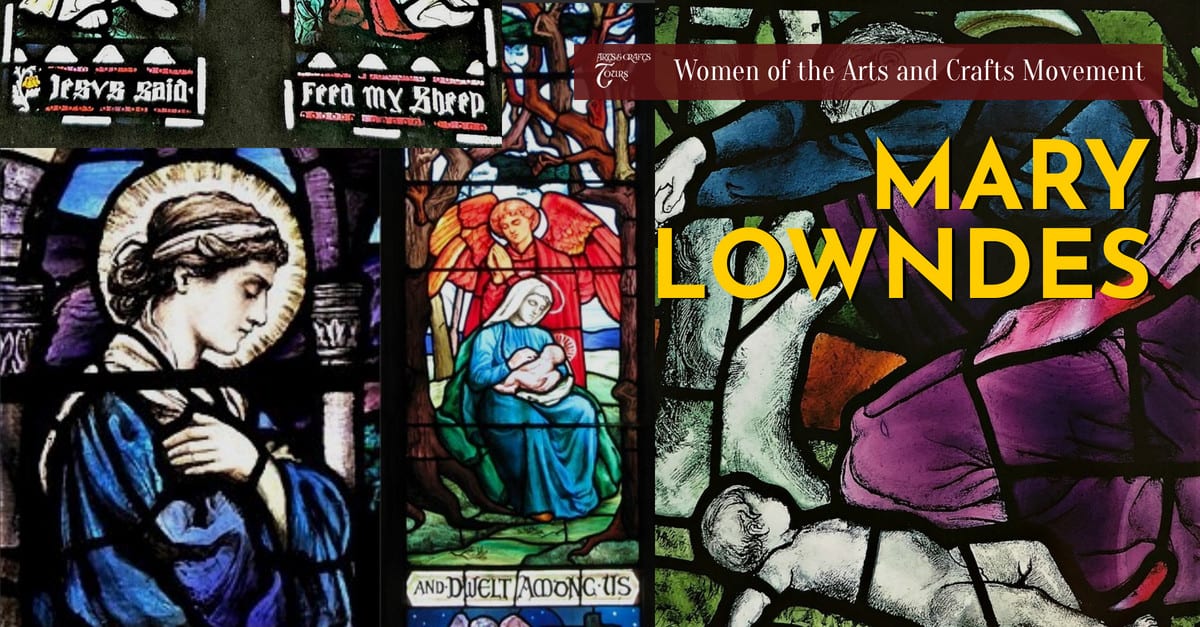 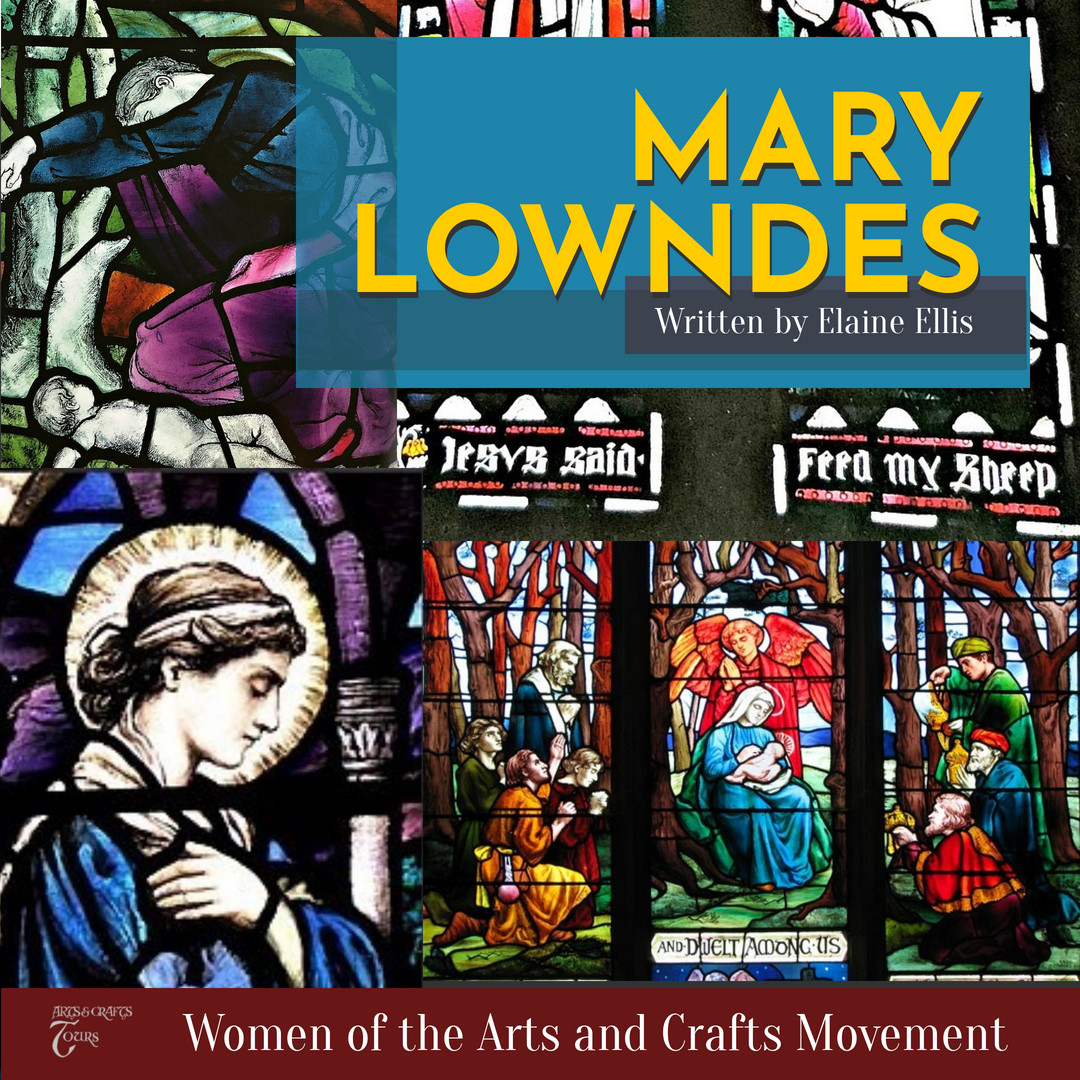 Mary Lowndes (1857–1929) a British stained-glass artist co-founded the stained glass studio and workshop Lowndes and Drury in 1897. She was an influential leader in the Arts and Crafts movement, not only for her stained glass work and successful studio-workshop, but also for opening doors for other women stained glass artists and she was an active participant in the suffragette movement, acting as Chair of the Artists’ Suffrage League, and creating poster art to assist the movement.

Lowndes was one of the first women to work professionally in stained glass in the 1890s. According to Peter Cormack in his 2015 book Arts & Crafts Stained Glass “Women, generally amateurs, might occasionally design windows and even take some part in their execution, but they rarely if ever practiced the whole art independently as a full time professional occupation”.

Mary Lowndes was born in 1857 in Sturminster Newton in Dorset where her father was the rector of St Mary’s Church. She studied at the Slade School of Fine Art in London and when she completed her art classes she became an assistant to prominent stained glass designer, Henry Holiday. In his studio-workshop she drew cartoons for several of their stained glass commissions. But she wanted more, and so while at Holiday’s studio she taught herself the techniques of stained glass. She then worked as a stained glass designer for James Powell & Sons from 1887 to 1892. The first window she painted was a two-light window titled “Feed my sheep”, completed in 1893 for St. Peter’s church, Hinton St. Mary, Dorset.

Lowndes lived and worked in Chelsea, and though she had her own studio to work on designs, there was no workshop nearby to complete her stained glass work. She had to travel to Southwark, to the Britten and Gilson studio-workshop, where she would select the colored glass for her commissions, paint the glass and supervise the firing and glazing of the windows.

The new studio-workshop in Chelsea was named Lowndes and Drury. The venture developed out of their shared experience of working for a big studio, and they created their new enterprise to meet the needs of the new school of independent artists associated with the Arts and Crafts Movement. The studio-workshop provided the technical facilities to allow artists to work on all stages of their stained glass commissions, from design to glass selection, painting and glazing.

The partnership was established with an initial investment of £30 from each partner. Lowndes also provided a £200 loan and additional loans of £280 came from Lowndes’s companion, Barbara Forbes, her aunt, Miss Alice Vivian Kaye and friend, Miss J.F. Pearson. Along with Drury’s small investment, the new firm was financed in its early years by these four women.

Though Lowndes managed the new business with Drury, she chose not to be chief designer of the workshop but like other workshop clients, she primarily used the facilities to work on her own stained glass commissions.

In 1906, with the need for bigger facilities, Lowndes and Drury founded the Glass House in Lettice Street, Fulham. The building at 9, 10, 11 and 12 Lettice Street was established as a stained glass studio for works commissioned by Lowndes and Drury and for use by independent artists. It was a purpose-built stained glass studio and workshop, designed by Christopher Whall and Drury. The Glass House attracted many artists, including Wilhelmina Geddes and Robert Anning Bell. In the early twentieth century, it was considered the most important studio-workshop for stained glass associated with the Arts and Crafts Movement. Though the buildings remain they are no longer used as a workshop.

As early as the 1890’s Lowndes became involved in the Women’s suffrage movement attending the International Congress of Women in London in 189. In January 1907, Lowndes established The Artists’ Suffrage League (ASL) to create dramatic posters, postcards, Christmas cards, and banners for suffrage events. She became its chair and Barbara Forbes, her companion, was the secretary.

Between 1903 and 1914 the women’s suffrage movement began to engage in public demonstrations and other propaganda activities. Lowndes’ used her training as an artist and stained-glass designer on many banners and encouraged the use of bold shapes and a love of full, rich colors, using striking combinations of green and blue, magenta and orange. She wrote a guide in 1910 to help women create their own Banners and Banner-Making, saying of the suffrage banners: “you do not want to read it, you want to worship it. Choose purple and gold for ambition, red for courage, green for long-cherished hopes … It is a declaration.”

Her banners were designed with female images like flowers, lit lamps, shells, sun rays, winged hearts; and to honor female heroines like Boadicea, Elizabeth Fry, Florence Nightingale, Marie Curie, Josephine Butler, Jane Austen, Mary Wollstonecraft, Charlotte Brontë and even ‘Victoria, Queen and Mother’. These were carried in their hundreds or thousands in numerous marches including London’s Pageant of Great Women 1909, Hyde Park Rally 1910, From Prison to Citizenship 1911, Pilgrimage for Women’s Suffrage 1913, and later that year at the grand funeral procession of Emily Wilding Davison, the suffrage movement’s martyr who threw herself under the King’s horse at the Epsom Derby. The Women’s Library at the London School of Economics houses an album of her original banner designs including fabric swatches.

Mary Lowndes died in 1929 and was buried in Buxted, East Sussex, England. Her name and picture, and those of 58 other women’s suffrage supporters, are on the plinth of the statue of Millicent Fawcett in Parliament Square, London, unveiled in 2018.