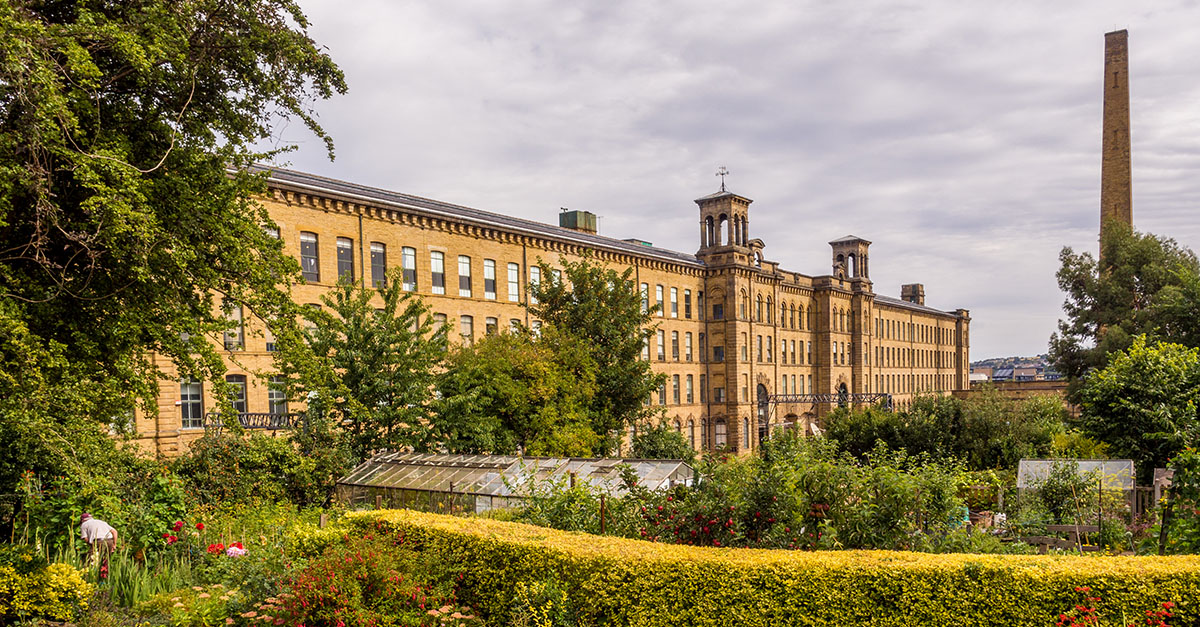 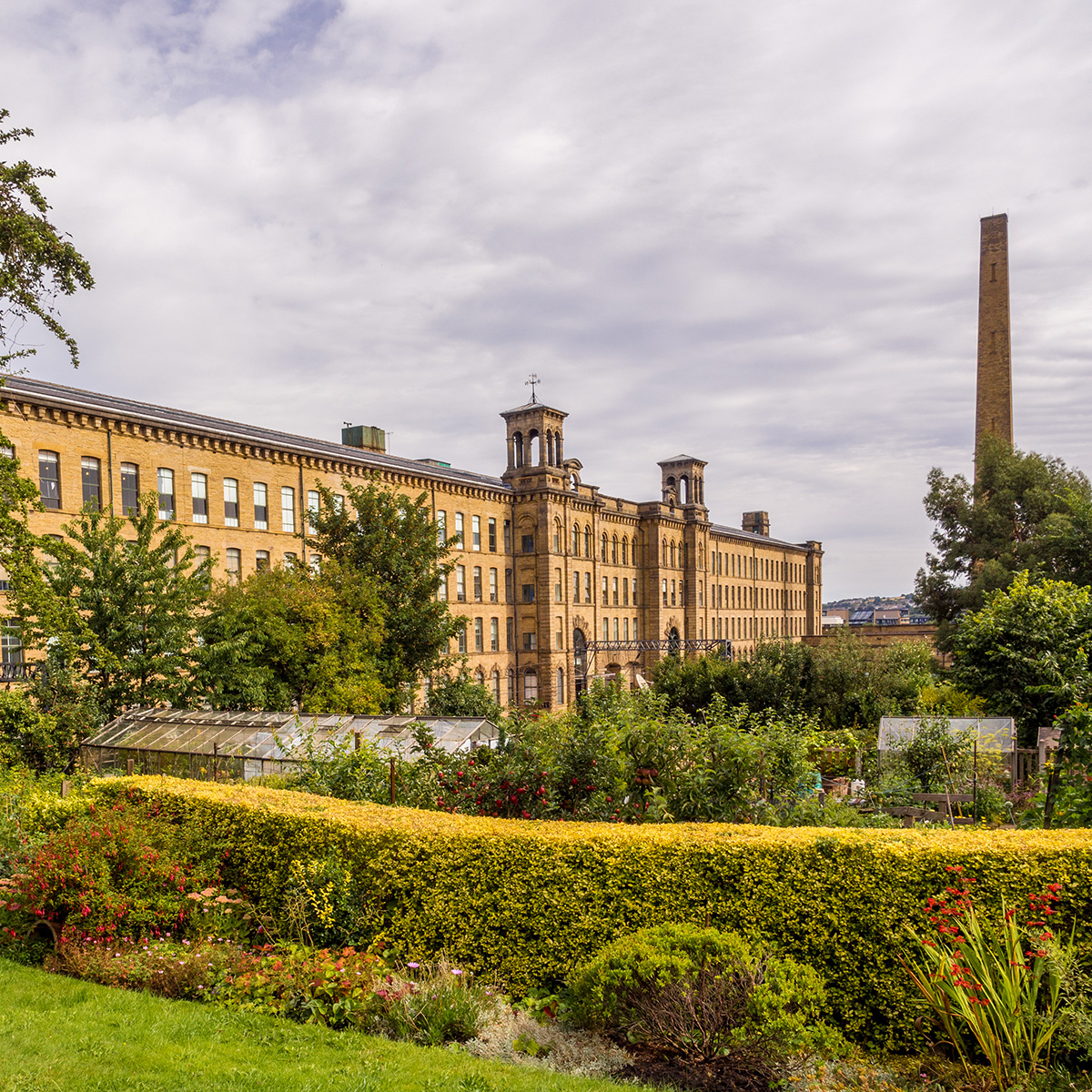 The town of Saltaire is situated on the River Aire, mid-way between Bradford and Shipley in Yorkshire, England.  Founded by Sir Tutus Salt, whose name, combined with that of the river, gives the town its nomenclature, it was built between 1853 and 1875 and, when completed, comprised over 800 houses, an Institute, a school, a Congregational church and Sunday School building, a Wesleyan Methodist chapel, an infirmary, alms houses and public baths.  The whole lot was designed by the Bradford architectural firm of Henry Lockwood and William Mawson.

What brought this about was the opening, in November 1853, of the great alpaca-wool mill building and offices, also designed by Lockwood and Mawson.  It was the intention, from the start, to develop a residential community to serve the factory, away from the disease, pollution and overcrowding of Bradford, and the building contract for the first houses was signed the same year.

Saltaire was not the first philanthropic development of workers’ houses to come in the wake of the Industrial Revolution, but it was to be the largest.  In the late 18th-century, mill-workers’ housing had been erected in the Derwent Valley in Derbyshire – at Cromford (1776), Belper (1788), Milford (1792) and Darley Abbey (1795), and then, soon after the turn of the century, at New Lanark in Scotland (1805).  The introduction of the railways saw new workers’ housing at Wolverton (c.1840), Crewe (1842), and Swindon (1842), the last being the closest to Saltaire in both scale and amenities.  In Yorkshire, the establishment by Colonel Edward Ackroyd of two new mill towns on the edge of Halifax, at Copley (1849) and Ackroydon (1851), predated Saltaire but their development was largely contemporaneous.  If Copley was criticised for its inclusion of back-to-back housing which The Builder described as, ‘one of the most pernicious principles of house building’ [1], it was a mistake not repeated at Ackroydon where the majority of the housing was built in the 1860s.

At Saltaire, Lockwood and Mawson made no such mistakes, although some of the external spaces between the terraces were rather tight, eventually necessitating the removal of a few end-of-terrace houses so as to provide better ventilation.  The plan for the town which they developed was set out on a grid: the terraces in the lower half of the town, built in the 1850s, running north/south; those on the sloping ground in the upper half of the town, as well as those around the Institute and school, built in the 1860s and 1870s, mostly running east/west.  Although there was an apparent social hierarchy in the arrangement of the terraces, the grander ones being along George Street and William Henry Street to the east, and the more humble terraces of Herbert and Whitlam Street being to the west, the reality was that the better-paid overseers from the factory tended to live in the more humble houses which they did not have to share, and where their wife did not have to work, while the larger and grander houses were often the home to multiple families and their lodgers.

What makes Saltaire so impressive is its visual coherence.  All the buildings, whether the mill, the Institute, the school or the houses, are designed in the Italianate style, incorporating rounded-headed windows with heavy keystones, linking string courses and stone corbels beneath overhanging eaves.  Only the humblest terraces dispense with these details but the regular pacing of their plain stone elevations tie them in with the more ornate terraces beyond.  If the Italian Villa style which characterises the houses was approaching its sell-by date in the early 1850s, it was certainly passé by the time the town was finished almost a quarter of a century later.  Yet Lockwood and Mawson resisted change and, with the exception of the use of a few Ruskinian Gothic windows in the larger terraces and villas of the 1860s, remained faithful to their initial conception.

Saltaire has changed remarkably little since it was completed in 1876, although the Congregational Sunday School, the Wesleyan Methodist chapel and the public baths have gone, as have a few of the end-of-terrace houses.  In 1984, the Congregational church (now United Reform) was listed grade I, and the Institute, school, mill and offices, grade II*.  The rest of the town – all the houses, the infirmary and the alms houses, as well as the new mill erected in 1868 – is listed grade II.  Finally, in 2001, Saltaire was inscribed on the UNESCO World Heritage list.  Saltaire is, in every way, a model town: a model of good architecture and good planning, a model of philanthropic intent and a model of historic conservation.

Neil Jackson is Emeritus Professor of Architecture at the University of Liverpool and the President of the Society of Architectural Historians of Great Britain.  He is also, together with Jo Lintonbon and Bryony Staples, the author of Saltaire: The Making of a Model Town (Reading: Spire Books, 2010).