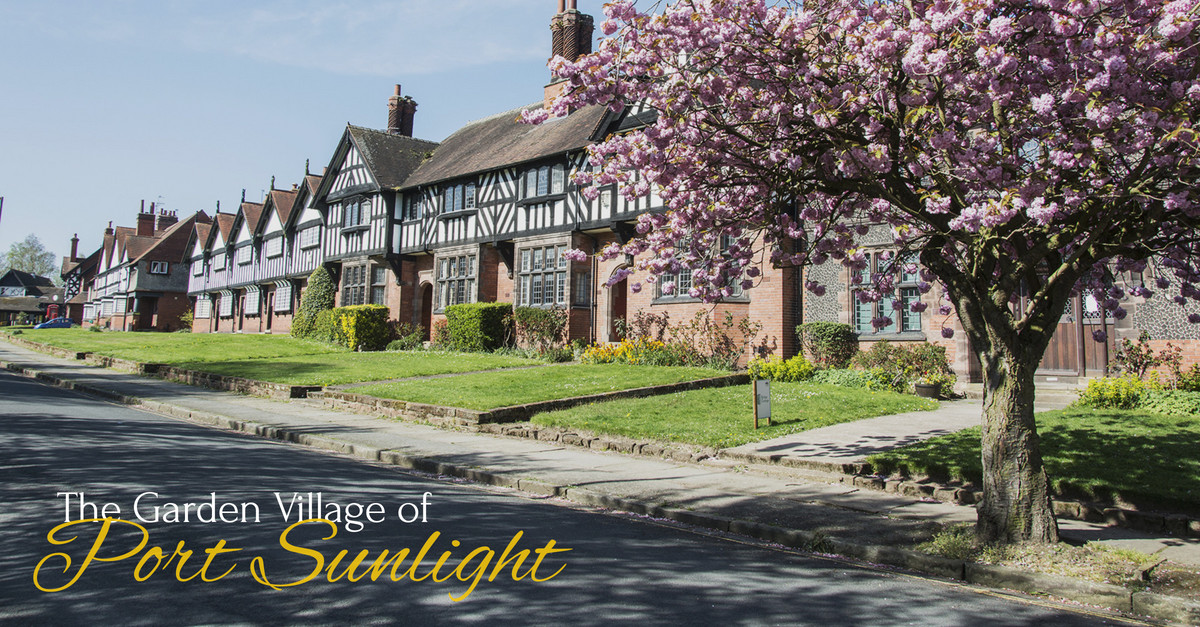 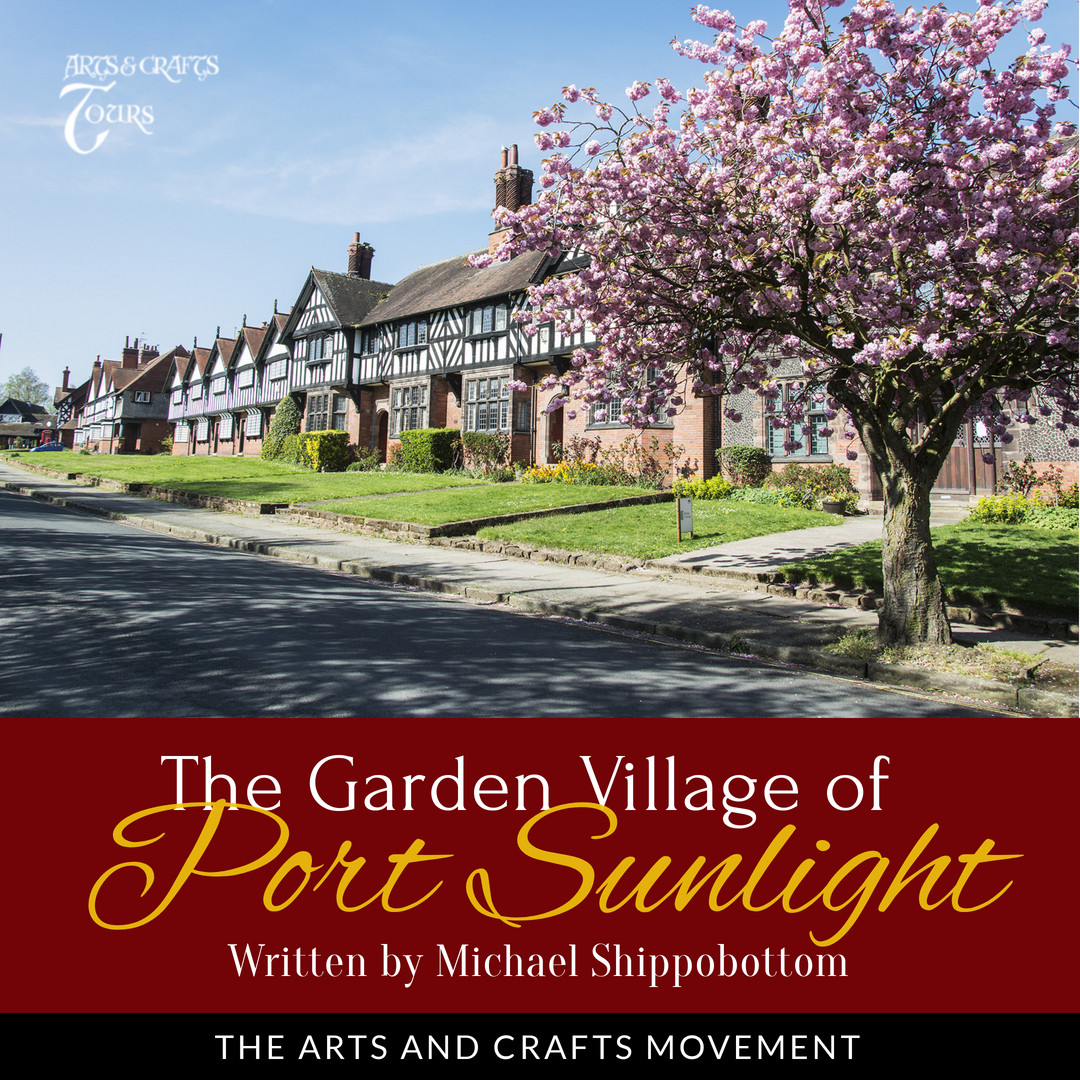 The Garden Village of Port Sunlight

The village was founded by W.H.Lever [1851 -1925], later to become Lord Leverhulme, as a self- contained community alongside the new soap factory established here in 1888 by Lever and his brother, when it proved increasingly difficult to expand an earlier factory in Warrington. Lever was born in Bolton, about 40 miles away at a time of great poverty and social unrest and he became motivated in wanting to improve workers’ security, welfare and housing. He was clearly influenced by several local model workers’ villages built by philanthropic industrialists but he was also inspired by the writings and vision of people like Ruskin and Morris in wanting to provide an ideal environment inspired by nature and beauty: Like Arts and Crafts idealists he was a firm believer in the power of good of art, good design and craftsmanship.

Writing at the turn of the 19 th and 20 th centuries Herman Muthesius, the great German architectural commentator, and author of Das Englische Haus, noted “…Port Sunlight will always be honoured with the highest recognition. For it is here that the gates of a new world were first opened; in place of the dismal appearance of utilitarian buildings we were shown a new vision; in place of the misery associated with the barren rows of workers’ terraces we find joyfulness and homeliness…”

Port Sunlight is indeed important for being the first meeting on any scale of the two traditions of the picturesque and the tradition of improved housing for industrial workers- up till that time normally seen represented by stark terraces and grid iron planning.

Muthesius also noted that “…If one wishes to obtain a quick and accurate appreciation of the achievement of contemporary English house- building, there is hardly a more comfortable means than by undertaking a journey to the factory village of Port Sunlight near Liverpool…”

These remarks, although written in 1904-1905, still apply: The village includes cottage blocks by national figures such as Ernest George and Yeates [3 blocks]; Ernest Newton [1 block]; Edwin Lutyens [1 block]; Maurice B. Adams [2 blocks] and Charles Reilly [1 block] but it is work by talented local architects which predominates, particularly the work of Douglas and Fordham; W and S Owen; Grayson and Ould and Wilson and Talbot. Of particular note is the work of Jonathan Simpson, architect and closest friend of W.H.Lever, who was employing Charles Holden [noted for his later London underground stations and University Senate House] at the time, as well as Simpson’s son James Lomax-Simpson, who was an extremely versatile and talented architect, and who completed the village with the wonderfully modelled and detailed vernacular revival blocks lining the central avenue. This writer was fortunate in having a number of meetings with Lomax-Simpson in the 1970s when, in his late 80s and early 90s at the time, he still had quite clear recollections of Lever [who was his godfather] and his methods of working: They had had many rows but Lomax- Simpson continued working for Lever for over twenty years and was his most prolific and favourite architect. After Lever’s death he remained with the company for the rest of his career, later being responsible for their headquarters in London – Unilever House.

These architects were much inspired by the Arts and Crafts movement. Ernest Newton was of course a founder of the Art Workers’ Guild whose members included Edwin Lutyens, and a number of the other London based architects/sculptors who made contributions to the village, while the local architects included Edward Ould [to whom Lomax Simpson was articled], the author of a noted book on timber framed buildings of the west midlands and north west, as well as Bloomfield Bare who for a while maintained an arts and crafts studio in the village and who was a regular contributor to The Studio magazine.

The village was constructed over several decades and its planning mirrors changing taste, from the earliest picturesque parts arranged around a central park to the later areas with a grand, tree lined, central boulevard. It is notable for its range of communal buildings including the remarkable Lady Lever Art Gallery and the church where Lever and his wife are buried. But above all it is notable for its cottage house blocks, no two of which are alike. All are wonderful examples of craftsmanship with decorative woodwork [external oak beams and studwork were initially left in their natural state] terracotta and stone detailing, leaded light windows, ornate ironmongery, lead and cast iron down pipes and occasional date stones and timber porches.

The village was influential from the first and, with Lever, played a key role in the founding of the Garden City movement, and hosted the Association’s 1902 conference – Lever was an early director of the company which established Letchworth and he was a trustee of Hampstead Garden Suburb

With little alterations or additions to the main streets and avenues of the village since it was built Port Sunlight offers a unique opportunity to experience a complete environment expressing late nineteenth and early twentieth century social and visual ideals.

Lever was a great traveller and was a regular visitor to continental Europe and to key locations in the Empire. But America was also visited by him on ten separate  occasions in order to develop business interests: Acquisitions included: a cotton seed oil mill in Vicksburg; 3/5 of the shares of Curtis Davis, soap manufacturers in Cambridge, Mass; and Benjamin Brooke and Co, soap manufacturers in Philadelphia.

1892 -1893 Visited the World’s Columbian Exhibition, Chicago, prior to its opening and where Lever Brothers had an impressive exhibition stand, from which promotional booklets describing Port Sunlight were available.

1919 Addressed a luncheon gathering at the Copley Plaza Hotel in Boston; Attended a dinner in his honour at the Union Club, Boston where he sat next to Calvin Coolidge, the then Governor or Massachusetts;

American connections within the village context include:

Undoubtedly America was a great influence on Lever but equally, given that there were a number of reports on the village published in the USA, Port Sunlight must surely be one of the many influences on some American suburban developments:

American publications on the village include: the St Louis architect, E.W.Beeson, Port Sunlight: The Model Village in England, 1911. Also a well illustrated article in Architecture and Building , 4 February 1899, in which reference was made to the ‘high artistic merit of the architectural work’ .

More recent American commentators include Lewis Mumford who wrote in The City in History , 1961, that Port Sunlight and Bournville “ ..rivalled in comeliness the best of the later suburbs..” and in referring to the central area of Port Sunlight that it showed the “..influence of princely absolutism even under an industrial disguise…”  Walter Creese in The Search for Environment in 1966 noted that Port Sunlight and other early garden cities were “ …made important in history by the manner in which they adapted the achievements of the contemporary English domestic school of architects, the best in the world at the time, to the earlier concern for the housing of the working classes…”  Robert A. M. Stern et al in Paradise Planned in 2013 wrote of the village being  “…not only an enduring icon of enlightened industrial village design but of suburban planning for all classes….Port Sunlight had a powerful effect on American practice…”

Michael Shippobottom spent most of his architectural career with Donald Insall Associates, conservation architects, latterly as a director and later consultant. Projects he worked on include: Windsor Castle following the fire; The Temperate House at Kew Gardens, [the world’s largest Victorian glass house]; and the former headquarters of the HSBC bank in Shanghai. He has contributed to a number of publications on W.H.Lever and some of his architectural drawings are included in Sir Donald Insall, Living Buildings, 2008