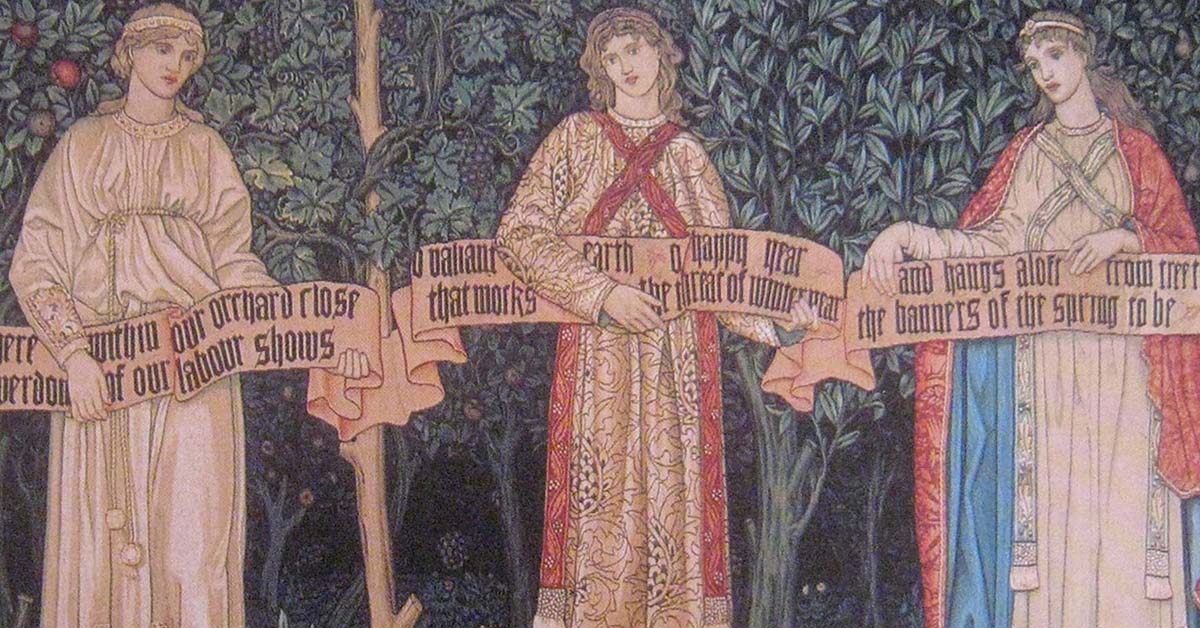 William Morris and His Influence on the Arts and Crafts Movement

William Morris (1834-1896), arguably the greatest designer-craftsman that England has ever produced, remains a perennially topical influence – not only in the field of arts and crafts but also as a pioneer of conservation and a visionary social thinker. During his lifetime, his lectures, writing and practical example gave birth to the Arts & Crafts Movement, which advocated the vigorous regeneration of handicrafts and an emphatic rejection of industrialism and commercialism.

Our tour traced many of the events and locations associated with Morris’s hugely prolific career, while also examining his fruitful collaborations with many of the leading artists, designers and architects of his time and his subsequent influence on later craft-workers.

We began in London, where Morris spent the greater part of his life and where outstanding examples of his work can be seen at the Victoria & Albert Museum and at Holy Trinity Church, Chelsea (known as the ‘Cathedral of the Arts & Crafts’). We visited Morris’s home from the late 1870s, Kelmscott House in Hammersmith, where the former coach-house was originally used for his first experiments in carpet-weaving and then as the lecture hall for his political activism. Nearby was his Kelmscott Press, and our tour included the house of his close collaborator, Emery Walker: among the highlights here is furniture designed for his own use by Morris’s friend, the architect Philip Webb (1831-1915).

The tour continued with visits to Webb’s first independent commission, Red House, built for Morris and his wife Jane between 1859 and 1861. Richly decorated in Pre-Raphaelite style, the house illustrates the romantic medievalism of early work by Morris and the firm he founded in 1861, Morris, Marshall, Faulkner & Co. We saw important examples of the Firm’s stained-glass at Langton Green and Speldhurst churches, as well as Philip Webb’s late masterpiece, Standen, a country house exquisitely furnished by Morris & Company.

William Morris’s formative years and the inspiration that he drew from rural England are themes explored in our visits to Marlborough College where, as a teenage schoolboy, he became fascinated by the long sequence of English history and pre-history. A special visit to one of the foremost private collections of Arts and Crafts work by Morris and his circle prepared us for a tour of villages in the Cotswolds, the rural heart of the Arts & Crafts Movement. These included Kelmscott, the 17th-century country home that Morris immortalised in his Utopian novel News from Nowhere; Inglesham, where the medieval church was sensitively conserved under his supervision; and Great Coxwell, where the cathedral-like tithe-barn was one of Morris’s favourite medieval buildings.

At Buscot Park, we saw the remarkable sequence of Briar Rose paintings created by Morris’s friend Sir Edward Burne-Jones (1833-1898). Their intricate detail provided an inspirational source of imagery for Arts & Crafts designers in all sorts of media. Burne-Jones’s work, often in collaboration with Morris, can be seen in many locations in the city of Oxford, where both artists were students in the 1850s and where one of their earliest joint projects – with D. G. Rossetti and other Pre-Raphaelites – can be seen in the Oxford Debating Union’s Arthurian Murals. Decorative art by the Morris circle is part of the collections at the Ashmolean Museum, and the Morris firm’s spectacular stained-glass is featured at Christ Church Cathedral and the Chapel of Manchester College.

Returning to the Cotswold area of Oxfordshire and Gloucestershire, our visits to the parish churches at Burford and Fairford introduced us to Morris’s activity as a pioneer campaigner for the conservation of historic buildings and their ancient artifacts. St Mary’s, Fairford, which he knew well, contains the most complete surviving series of medieval stained-glass of any English church. The inspiration of ancient glass is evident in Selsley church (by the architect George Frederick Bodley), where the glazing scheme was carried out entirely by Morris, Marshall, Faulkner & Co. in the early 1860s.

Morris and his Arts & Crafts followers of the early 20th century loved the beautiful vernacular architecture of the Cotswolds, famed for its many honey-coloured stone buildings. One of the finest examples is Owlpen Manor, a late-medieval building lovingly conserved by the architect Norman Jewson, who also planned the magnificent gardens. Likewise notable for its architecture, hilltop setting and historic furnishings is Hilles, designed by architect and conservationist Detmar Blow, who as a young man drove the agricultural used as Morris’s hearse for his burial at Kelmscott. The house contains a unique Morris tapestry, created at the renowned Merton Abbey workshops in the 1890s.

The English Midlands has its own rich heritage of Arts & Crafts buildings and artifacts. Wightwick Manor, a late 19th-century house built for the Mander family, displays their magnificent collection of work by Morris and associated artists, including textiles, furniture, stained-glass and paintings. The collections of Birmingham City Art Gallery are equally rich, with many important works by Burne-Jones (who was born in the city), including his massive Star of Bethlehem water colour. Nearby, St Philip’s Cathedral contains Burne-Jones’s four epic masterpieces in stained-glass, widely regarded as the greatest achievement in the medium since the Middle Ages.

The tour concluded with a return to the Cotswolds: the market town of Chipping Campden in Gloucestershire became a hub of Arts & Crafts activity in the early 1900s after C. R. Ashbee’s Guild of Handicraft migrated there from its previous home in East London. They were soon followed by others who developed a tradition of fine craftsmanship that flourished in the town well into the twentieth century. Indeed, the Guild’s original metalworking workshop, in its historic Silk Mill premises, remains virtually unchanged, with craftsmen continuing the traditions established by Ashbee and his colleagues. The village of Sapperton was another centre of Arts & Crafts work in furniture, metalwork, and the building crafts, where Morris’s disciples Ernest Gimson, Sidney, and Ernest Barnsley produced modern work that was creatively inspired by local craft traditions. Rodmarton Manor is both a spectacular example of vernacular-inspired architecture and a treasury of Arts & Crafts woodwork and other crafts.

There can be a few more influential figures in the applied and decorative arts than William Morris. This tour, which encompassed many aspects of his creative genius, enabled participants to experience a vibrant tradition of design and craftsmanship that blossomed between the 1880s and the early twentieth century.