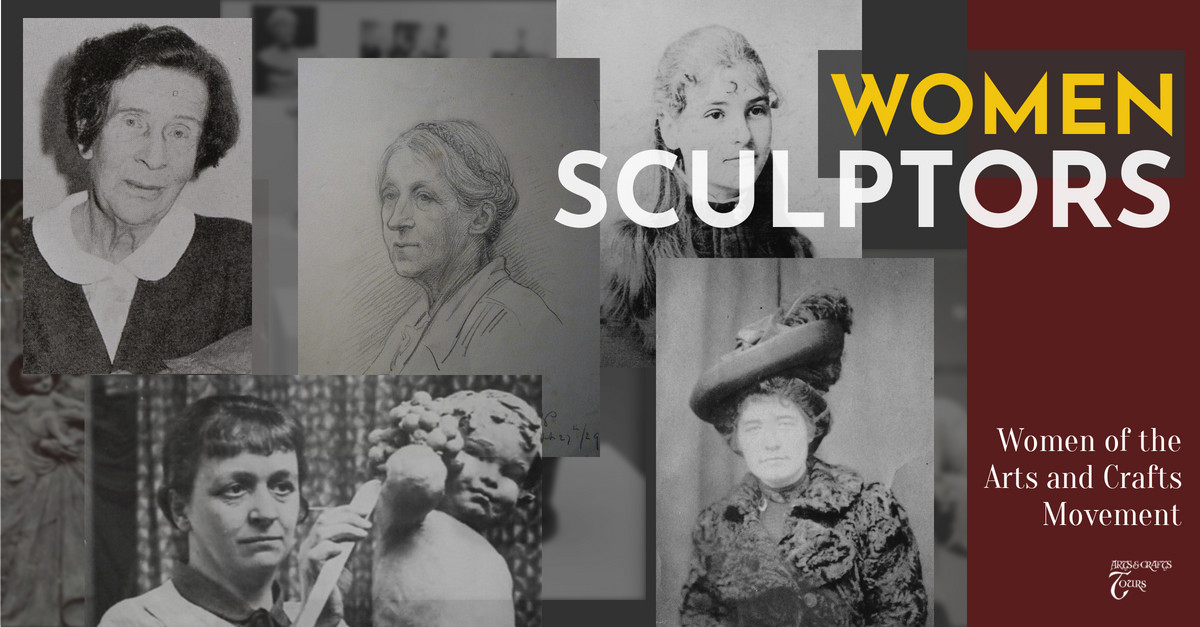 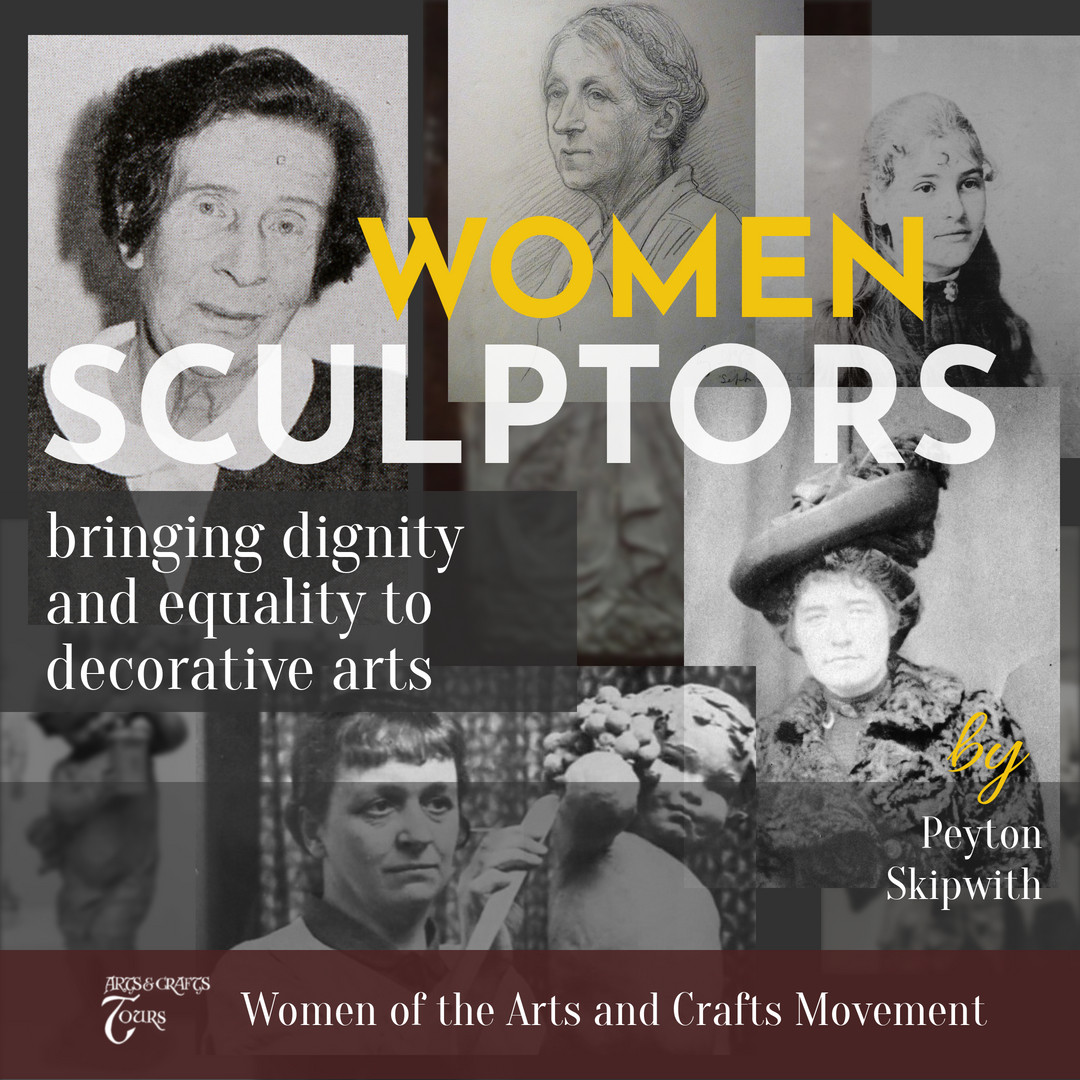 Women Sculptors of the Arts and Crafts Movement

Sculptors played a major role in forwarding the aims of the Arts and Crafts Movement.  Hamo Thornycroft, George Frampton and Onslow Ford were among the founding members of the Art Workers Guild, with others including F.W. Pomeroy, William Reynolds-Stephens, Alfred Gilbert, Stirling Lee and Harry Bates being elected in the first few years of the Guild’s existence. Their major works adorn public buildings in many of the major cities of Britain, while free standing sculptures such as Gilbert’s Eros, Pomeroy’s figure of Justice and Frampton’s Peter Pan are part of our shared visual lexicon, as familiar as the Statue of Liberty or Michelangelo’s David. Very, very, very much less familiar are works by women sculptors of the period, as highlighted in a new book from Liverpool University Press, Working Against the Grain: Women Sculptors in Britain c.1885-1950, by Pauline Rose, (ISBN 978-1-78962-156-3).

This book throws up a roll-call of names – Anne Acheson, Phyllis Bone, Frances Bessie Burlison, Ella and Nelia Casella, Phyllis Clay, Frances Darlington, and so on through the alphabet to Lilian Maude Wade and Lucy Gwendolen Williams.  Among them are one or two who are familiar, indeed famous, such as Barbara Hepworth and Kathleen Scott, but most are little known, though I have had the privilege of knowing and writing about three of them – Mary Spencer Watson, whose youthful image, mallet in hand, adorns the book’s cover, Joyce Bidder and Dora Gordine.  Spencer Watson worked chiefly in wood and stone, especially her local Purbeck freestone, Gordine in bronze, while Bidder worked in a wide range of materials from marble and bronze to wood, terracotta, glazed earthenware and ivory.

From the large number of women sculptors detailed by Pauline Rose two are outstanding for their ecclesiastical work – Ellen Mary Rope (1855-1934) and Violet Pinwill (1874-1957) – which makes the omission of any mention of Mary Watts’ chapel at Compton all the more surprising. Ellen Mary Rope was born at Blaxhall near Woodbridge in Suffolk but was partly educated in London, where she studied under Octavia Hill, the social reformer and friend of John Ruskin before attending Ipswich School of Art. She returned to London to study at the Slade School of Art, a part of London University, where she first studied drawing and painting with the French emigré, Alphonse Legros, and then from 1880 turning her attention to sculpture and modelling,making a particular study of Florentine Renaissance decorative sculpture. Much of her future work was to be in low relief using casting methods that allowed the making of replicas in plaster or metal. On occasion she also worked in marble, a fine example being The Angel of the Resurrection in Salisbury Cathedral, a memorial to Mary Anne Moberly, wife of Bishop George Moberly. It is a sad reflection on the way such works (and not just by women) are treated by the ecclesiastical authorities, in order both to see and photograph it the author had to get a cupboard removed that had been placed in front of it. Rope also designed for the Della Robbia Pottery in Birkenhead 1886-1906. Two of her nieces were also artist-craftsmen working in stained glass.

Violet Pinwill was altogether a different case being an ecclesiastical carver working almost entirely in wood with a preference for elm and oak. Violet was clearly a forceful character; she was the fifth of seven daughters of a West Country clergyman who, in 1880, became vicar of Ermington in Devon. The leading Arts and Crafts ecclesiastical architect, J.D. Sedding, had been asked by the local landowner and patron, Henry Mildmay, to undertake the restoration of the churches at Ermington and the neighbouring village of Holberton. While he concentrated on Holberton, his nephew, E.H. Sedding, stayed with the Pinwills at the rectory at Ermington where the Trask family of local craftsmen carried out the work. The vicar’s wife arranged for one of the Trasks to teach three of her daughters – Mary, Ethel and Violet – who went on to set up their own carving workshop over the vicarage stables.  In due course Violet became sole proprietor of the business and went on to run the firm after it had moved to Plymouth, for close on half-a-century until her death in 1957.  Her work, and that of her team, is reputed to adorn over two hundred churches in Devon and Cornwall.

Work by both Ellen Mary Rope and Violet Pinwill is illustrated and discussed in another new book, Arts and Crafts Churches, by Alec Hamilton, published by Lund Humphries (ISBN 978-1-84822-321-9) This book is an absolute must for anyone interested in ecclesiastical architecture, the Arts and Crafts Movement, and the decorative arts of the late nineteenth- and early twentieth-century. Readable, erudite and well illustrated., including a stunning shot of Violet’s elaborately carved pulpit at Abbotsbury.