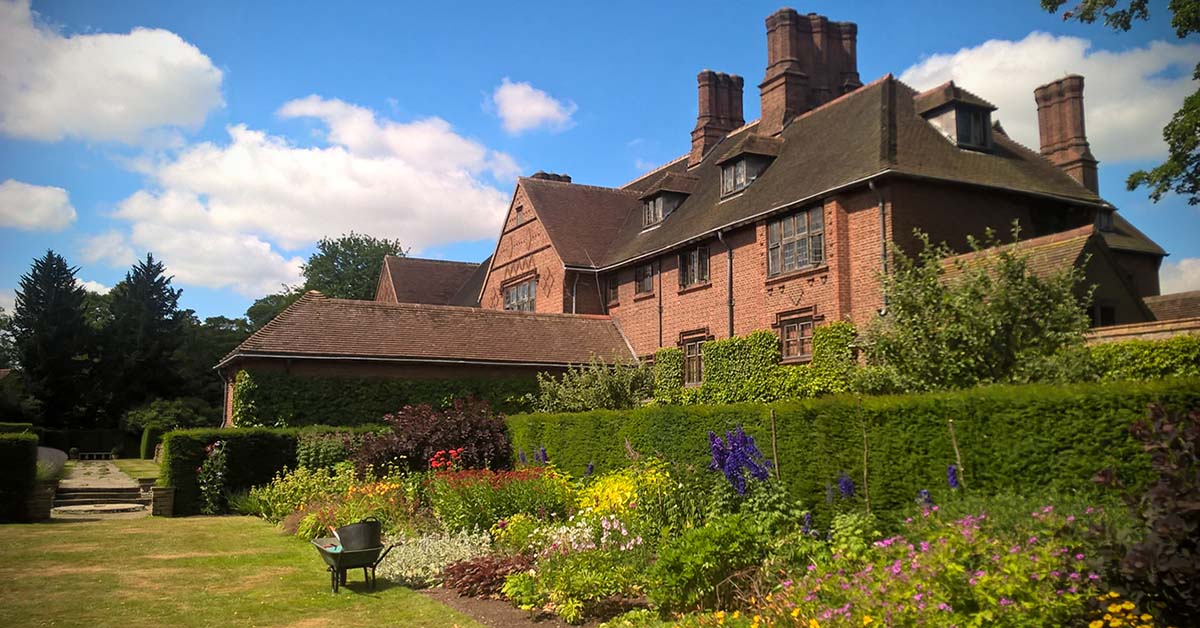 Our tour in the autumn of 2022 centres on two counties with a particular hold on the British imagination. The first, ancient and beautiful Yorkshire, is the country’s largest and well-known for its independent minded population who believe it to be God’s own country.

The second county is Cumbria, best known for its famous Lake District. The Romantic poet William Wordsworth is one famous late resident, but particularly significant to us, of course, is visionary reformer, John Ruskin, who made his home on the shores of Lake Coniston.

We begin in Nottinghamshire at Sir George Gilbert Scott’s Gothic Revival Kelham Hall, 1858-62, on the banks of the River Trent. You may know Scott from his glorious St Pancras station and though country houses were only a fraction of his work Kelham is a feast to behold and wander in its corridors and vast rooms. From one of the earliest of the Arts and Crafts buildings to a later work, we move on to Lincoln Cathedral and the mural by Duncan Grant in the Russell Chapel. A fascinating work by Randall Wells, St Wilfrid’s Church in Halton, was said by Pevsner to be a bridge between the Arts & Crafts and Modernism. But its architect Randall Wells’ Arts & Crafts credentials were impeccable. Here too you’ll see sculptures by Eric Gill.

Yorkshire is divided into three parts: North, West and East – the areas roughly previously known as its Ridings. While the North is particularly rich in castles, abbeys and beautiful houses, it was also the stomping ground of a man known as the Lutyens of the North, Walter Brierley. We have selected two of his houses to visit, and they’re very different to each other. The first is Sion Hill Hall, of 1913 and then on to Goddards, his final commission.

We then leave Yorkshire and enter the wild Lake District county of Cumbria – once the two counties of Westmorland and Cumberland The most famous of the Lake District’s lakes is Lake Windermere, and half way up this lake’s east shore is Blackwell – the M. H. Baillie Scott-designed house for Manchester brewer and philanthropist, Sir Edward Holt, for weekends and holidays. It is now a museum dedicated to the history of the Arts and Crafts Movement.

Not too far away is Broad Leys – a house designed by C.F. Voysey and we can really appreciate two Arts & Crafts metaphors for all important homeliness and comfort: the big protective roof – here of local Westmorland slate – and big fireplaces, especially inglenooks.

And then, as so many did, we will take a boat – the mid-Victorian steam yacht Gondola – on Coniston Water to arrive at Ruskin’s house, Brantwood. Ruskin moved to Brantwood when he was 53, and it was to be his home for the remaining 27 years of his life: he’s buried nearby in Coniston churchyard.

Beatrix Potter who bequeathed her farms and sold her drawings in order to purchase land around Lake Windermere for the National Trust was encouraged by Canon Hardwicke Rawnsley -who was actually one of the Trust’s three founders. He founded the Keswick School of Industrial Art – at which London craftsmen successfully taught local Lake District people wood and metal work skills, – is now a restaurant. We will have the chance to admire some of the school’s excellent pieces at the Keswick Museum & Art Gallery.

Our next stop is to Manchester – city of the builder of Blackwell, Edward Holt’s, brewery –where we see the work of Edgar Wood. He was a Manchester architect who worked in the orbit of that city, but had a love of flat roofs and geometric patterns, and showed some empathy for Art Nouveau, too. We will have a tour of Wood’s recently restored Long Street Methodist Church & Schools. We will learn about the quite complex influences in Wood’s work and how he was the pioneer of modernism in England. And as we conclude our tour, we’ll have a hard deciding which works are our favourites and when we want to come back.