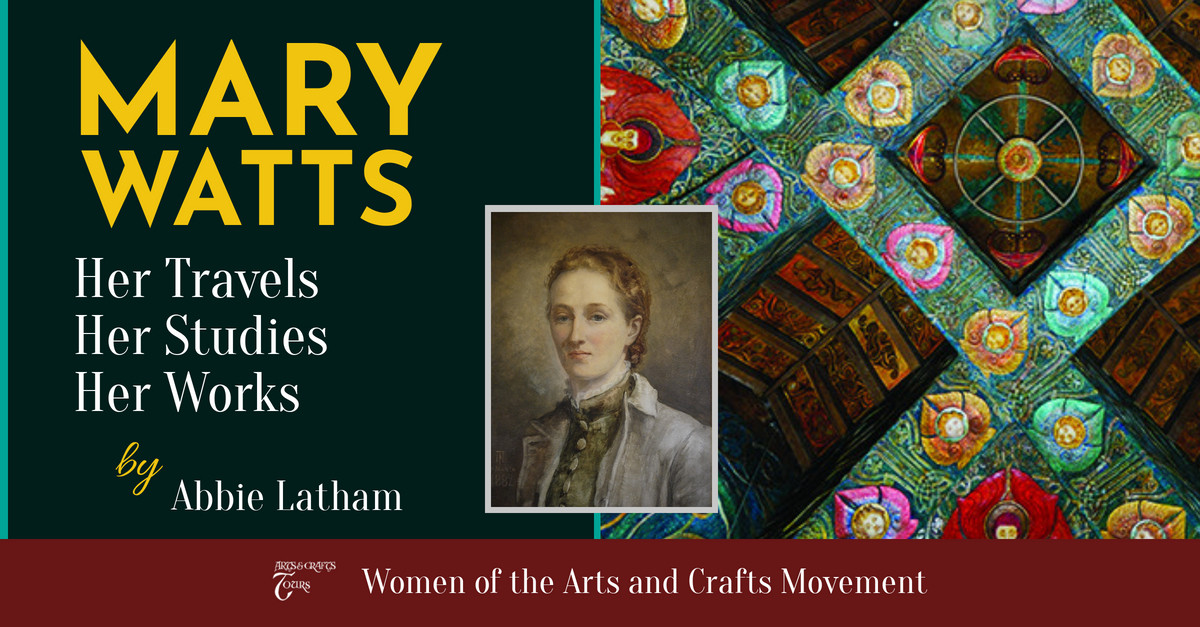 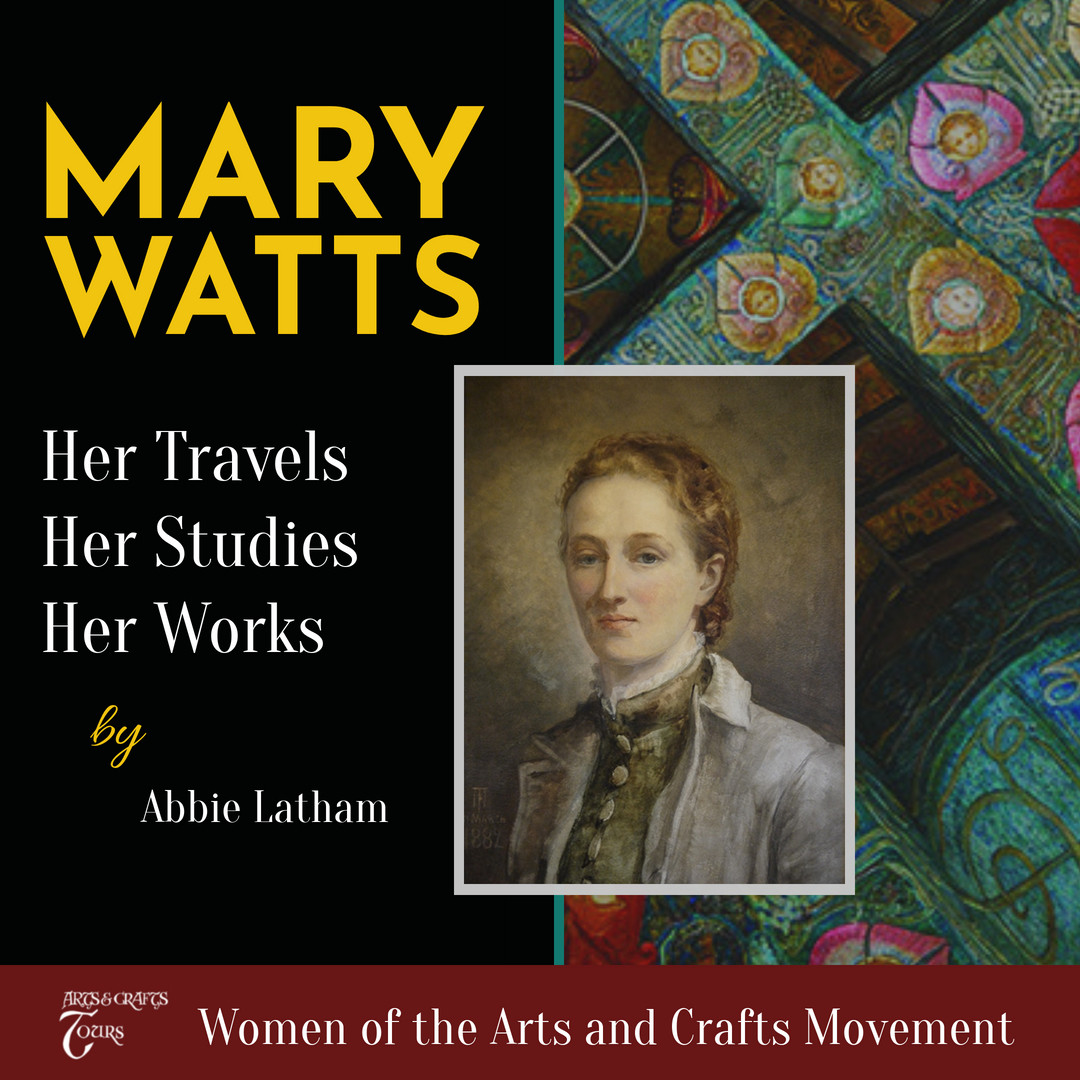 Mary Watts – Her Travels, Her Studies, Her Works

For too long referred to as ‘the painter’s wife’ or ‘Mrs G F Watts’, often of her own accord, Mary Seton Watts (1849-1838) was an accomplished artist in her own right. A gifted designer, Watts was the creative powerhouse behind two significant enterprises: the Watts Chapel and the Compton Potters’ Arts Guild.

Unfortunately, due to her somewhat self-effacing writing, we know more about the life and career of her husband – George Frederic Watts OM RA (1817 – 1904) – than her own. Mary Watts (née Fraser-Tytler) was born in Ahmednagar, India in 1849. Just two years later, the Fraser-Tytler’s returned to the family seat in Scotland. Their return, however, was sadly marred by the sudden death of Mary’s mother, at just 33 years old. Following the loss of her mother, and her father’s subsequent return to India, Mary and her elder sisters were raised by their grandparents at Aldourie Castle, on the eastern shore of Loch Ness.

From the early 1860s, the Fraser-Tytler sisters returned to live with their father (along with his second wife and four half-siblings) at the family’s second estate at Sanquhar, north of Dumfries. Although limited, information regarding her childhood years suggests that creative pursuits were actively encouraged in the Fraser-Tytler household. In the Watts Gallery collection there is an album, believed to be one of Mary Watts’s earliest surviving artworks, created when she was between just 15 to 18 years old. Adopting a mixed media technique, Watts decorated a selection of photographs with ink and watercolour illustrations. The designs range from intricate floral imagery, to opulent frames for family and celebrity cartes de visite. Amongst these photographs, some of which are reimagined in rather humorous settings, a portrait of the young artist herself has been identified.

In 1868, the Fraser-Tytler family spent an extended period in Europe, where Mary spent her time studying the Old Masters in both Germany and Italy. On her return she relocated to London, enrolling at the National Art Training School, South Kensington. Around this time, in the spring of 1870, Mary met G F Watts for the first time at his studio in Little Holland House, Kensington. Over the next sixteen years their relationship slowly developed from mentorship to courtship, and the couple eventually married on 20 November 1886.

Prior to her marriage, from 1872-1873 Mary Watts was enrolled at the newly established Slade School of Fine Art. After leaving the Slade, she continued her studies in London under the celebrated Parisian sculptor Aimé-Jules Dalou (1838-1902). Unfortunately, little of her work from this period is known to have survived. At Watts Gallery – Artists’ Village, however, a small terracotta statue of a mother and child demonstrates Dalou’s influence on the artist. Looking closely at this tender composition, one can see traces of the artist’s own fingerprints across the expressive surface.

It was her work in terracotta that established Mary’s involvement with the Home Arts and Industries Association. In 1884, an undisclosed friend of the artist persuaded Mary to hold clay modelling classes, twice a week, at a ‘boys’ club’ in Whitechapel. The purpose, Mary recalled, was to give the boys, who were ‘chiefly shoeblacks, an interesting hour or two’ and to show them ‘the pleasure of making something in their leisure time’. Subsequently, a few months before her marriage she was elected to serve on the Home Arts Council. Her involvement with the Association would go on to shape the rest of her artistic career, and sow the seeds for her later projects in Compton.

Following an extensive six-month honeymoon (during which they visited Egypt, Greece, Turkey, Sicily and France) the Wattses returned to Kensington. Aware of G F Watts’s failing health, the couple accepted an offer from their friends Andrew and May Hichens, to stay at their Surrey residence Monkshatch. Arriving in Compton in the winter of 1889, the couple remained until April the following year. This visit, initially intended to be a short break, redirected the course of their life together. It resulted in the couple founding a remarkable Arts & Crafts complex, known today as Watts Gallery – Artists’ Village.

With active encouragement and financial support from the Hichens, the Wattses set about building their own rural retreat in Compton. Nestled in the Surrey Hills, their new studio-home, Limnerslease, was designed by the Arts & Crafts architect Sir Ernest George (1839-1922). The house also provided Mary Watts with an opportunity to explore new directions in her own art. Between 1890 to 1896 she created a series of elaborate gesso panels to decorate the ground floor ceilings. Incorporating symbols sourced from various ancient civilisations and religions, these panels set a precedent for her designs at the Watts Chapel.

Moved by the rural decline that surrounded her in Surrey, Mary Watts endeavoured to find an opportunity to engage with the Compton community. In May 1894, upon hearing that the Parish Council were seeking land for a new cemetery, Mary offered (on behalf of her husband) to build a mortuary chapel on the site. United by their belief in ‘art for all’, Mary designed and managed the community-based project, whilst G F Watts financed the enterprise through his sought-after portrait commissions.

Inspired by the designs she had been making throughout the fabric of the house, and drawing on her previous experience in Whitechapel, Mary welcomed local villagers into her studio at Limnerslease. Hosting free clay modelling classes every Thursday evening, the participants made terracotta tiles, which were used to decorate the exterior of the chapel. Overseen by the architect George Redmayne FRIBA (1840-1912), the building, along with the exterior decoration, was completed by 1898. The interior decoration, a complex and vibrantly coloured scheme of gesso, tempera and gilded panels, was not finished until April 1904.

For those of you who have not yet visited, the Watts Chapel is difficult to put into words. Influenced by Mary Watts’s Scottish heritage, the exterior decoration shows a unique mix of Celtic Revival designs, stylised Art Nouveau patterns and Romanesque architectural features. The decoration of this Christian chapel, situated in the rural Surrey countryside, is somewhat universal. The designs draw on the visual language of a range of other faiths and cultures, including references to Egyptian, Buddhist and Hindu symbolism.

From the hinges of the front door to the small flower decorations of the interior (made by children from the village), over 70 local people and craftsmen were involved in the creation of the Watts Chapel. Mary Watts herself dedicated the building to ‘the loving memory of all who find rest near its walls, and for the comfort and help of those to whom the sorrow of separation remains’.

Witnessing the success of the Chapel project, Mary was approached by a number of participants, who expressed their interest in turning the recreational lessons into a professional career. Inspired by the ideals of the Home Arts and Industries Association, she readily accepted. This social enterprise – turned village industry – would become known as the Compton Pottery or the Potters’ Arts Guild.

Endeavouring to ‘make even common things on good lines’, the work at the Compton Pottery began with the design and distribution of terracotta garden pots. In order to keep up with demand, in 1901 a manager was hired and a new premises (including a larger kiln) was built across the road from Limnerslease. Over time new products were introduced including a range of brightly coloured vases, bookends, wall plaques, models of saints and other household ornaments. Throughout the early twentieth century trade was steady, and the products proved popular with stock being sold at Liberty & Co, London. Sadly, following Mary’s death in 1938, and after several organisational changes, in June 1951 a journalist from The Surrey Times reported as he watched the kiln being filled for the final time.

For Mary, her main objectives for the Watts Chapel and Compton Pottery were to: prevent traditional handicrafts from being supplanted, to provide work for local people in the face of rural unemployment, and to make art more approachable for all in society. Today at Watts Gallery – Artists’ Village we continue to uphold Mary Watts’s belief that art, in its ability to inspire and empower, should be accessible for all. Just as Mary invited the people of Compton into her studio, Watts Gallery Trust works in partnership with a number of local charities, schools, community groups and prisons to support the well-being and rehabilitation of young people and adults through the arts.

In response to COVID-19, the temporary closure of Watts Gallery – Artists’ Village has put our charity and its founding mission of ‘Art for All’ at great risk. To safeguard our future, please consider donating to our Hope 2020 campaign, to ensure that we can continue to inspire, engage and transform the lives of the community that we serve: https://www.wattsgallery.org.uk/hope2020/

Abbie Latham is in the second year of her Curatorial Traineeship at Watts Gallery – Artists’ Village.